Niko is a lively pre-teen reindeer boy, who has spent his life so far together with his mom Oona. Niko's father is one of Santa's Flying Forces. His name is Prancer and Niko just met him for the first time last Christmas. During last year's adventure of saving Santa and the Forces, Niko learned to fly, something he really enjoys doing. Nowadays spends every second weekend at Santa's Fell having fun with his dad. Niko's secret wish is to get his dad to move back to Home Valley, to live together with him and Oona. Niko has three friends; a flying squirrel named Julius (who is a father figure to him), a weasel named Wilma and a girl reindeer named Saga.

Niko first appears when he watches the Flying Forces test flying and ends up knocking down Grandpa while running. He then tries to fly but falls onto the ground and is teased by two other reindeer youngsters, but Julius tells Niko to ignore them and walk away, before throwing snowballs at them when they continue to taunt Niko. Niko tells Julius that he is going to Antler Hill to practice flying, but is overheard by his friend Saga and her father the herd's leader, who forbids Niko to leave Home Valley as wolves are out there, but Niko and Saga secretly plan to go Antler Hill the next day. That night, Niko asks his mother Oona to tell him about how she met his father to which she does and says that he was one of the Flying Forces.

The next day, Niko goes to Antler Hill with Saga and tries and fails to fly again, just before Julius arrives and tries to get Niko to return to Home Valley, but to no avail. With encouragement from Julius, Niko tries to fly by jumping off a tree, but ends upside down. Just then, Niko spots two wolves named Smiley and Specs, so he and Saga run back to the herd while Julius distracts the wolves. Niko and Saga go to Oona, the Leader and Grandpa and tell them they saw wolves. When asked by Grandpa if the wolves followed them, Niko says they lost them, before Smiley appears and tries to attack the herd, but the Leader knocks him to the ground and runs to catch up with Niko and the herd. The Leader traps Smiley in snow, but is injured in the process.

That night, Grandpa berates Niko for leading wolves to the herd and getting the Leader hurt, just because he wanted to practice to fly. Oona comes to Niko's defence, saying that he is only a boy and that the wolves will return and there will be many. Later, the herd travel through a storm and Niko hears Grandpa calling him unreliable and Oona telling Julius that she will stop talking about Niko's father and the Flying Forces. He also hears the Leader forbidding Saga from playing with Niko again, claiming that next time, he will bring death to them all. Feeling unwanted in the herd, Niko leaves to go to Santa's Fell and find his father. Noticing that Niko isn't in the herd, Julius tells Oona that he will find him. Julius catches up with Niko and fails to convince him to return to the herd. Along the way, the duo meet a weasel named Wilma whom they help get berries for. Niko gets sepreated from Julius during another storm and ends up covered in snow and overhears Black Wolf's plan to devour Santa and the Flying Forces (to gain their ability of flight) and eventual the children of the world, but is caught and chased by the wolves. Niko reunites with Julius and is saved from the wolves by Wilma, who leads them to Santa's Fell, having previously worked there.

Niko flies back to his herd with Wilma and reunites with Oona and apologises for running away. Just then the Flying Forces arrive and declare Julius an honorary member. Prancer asks Niko if he's coming with them, to which Niko says that he came to look for his father but he was with him all along meaning Julius, but promises to visit Prancer after Christmas. After Santa and the Flying Forces leave, Niko is joined by Saga, who gives him a kiss on the cheek. Niko is last seen flying along with Julius and leading the herd to a new home with plenty of food and water. 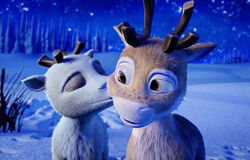 Niko with Julius, Wilma, Saga and The Flying Forces
Add a photo to this gallery
Retrieved from "https://christmas-specials.fandom.com/wiki/Niko?oldid=143944"
Community content is available under CC-BY-SA unless otherwise noted.