Noël is a 1992 coming-of-age Christmas special, written and created by Romeo Muller, about a Christmas ornament that brings joy to the lives of the families that possess it. It originally premiered on NBC's primetime schedule following Inspector Gadget Saves Christmas on December 4, 1992.

Noël is a little red glass Christmas ornament who was created with a tear of happiness from a glassblower in the 1940s. That gave him an attitude of perkiness and enthusiasm that his fellow ornaments, particularly an ice maiden one named Miss Freezenda, did not share. The ornaments were bought by a family with three children, and were placed under a wise Christmas tree named Brutus. Noël, in his cheery nature, befriended Brutus, and enjoyed the children's company. He also saw a stable placed under Brutus, but wondered what was in it, which Brutus explained was the true meaning of Christmas. Noël especially enjoyed watching the joy and laughter throughout the holiday season. However, it eventually came to an end, and Noël was extremely disappointed to be placed back in the ornament box and never see Brutus again.

A year passed, and Christmas came again. Noel befriended this year's tree, a jolly one named Harold, although he still wondered what was in the stable under Harold. While Noël enjoyed this year's festivities, it came to an end again, and he was returned to the box, and Harold would never be seen again. As more Christmases came and went, Noël noticed the children were looking more and more like adults each passing year. More time passed, and they grew up and moved out, and their now-elderly parents decided not to buy a tree for Christmas anymore, much to Noël's extreme sadness. He and the other ornaments fell into a deep sleep, during which time, the parents died, the house was abandoned, and the ornaments were left forgotten in the attic.

Many years later, in the 1990s, another family renovates and moves into the house. At Christmas time, they find the ornaments in the attic, but find them too chipped and old to use. However, at the last moment, they decide to use the now-frail Noël anyway. He, while sad to say goodbye to the others, is happy to meet the new tree, Abraham, but in his new state, falls from his branch and shatters. However, his soul (in the form of the happiness tear) is still intact, and he can see inside the stable for the first time. He sees the infant Jesus and finally understands the true meaning of Christmas. His happy soul, now free of its glass case, becomes a glowing red ball of happiness, and he leaves the house to spread Christmas cheer all over the world.

During the television promotion leading up to the premiere, the Golden Books adaptation, written by creator Muller and illustrated by Bill A. Langley, was released for the 1992 Christmas shopping season. 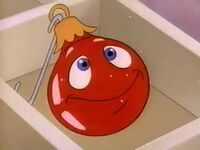 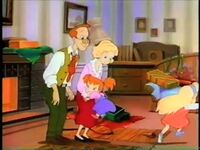 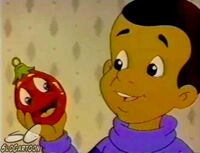 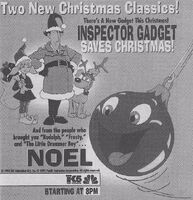 Retrieved from "https://christmas-specials.fandom.com/wiki/No%C3%ABl?oldid=163049"
Community content is available under CC-BY-SA unless otherwise noted.