Olaf's Frozen Adventure is a holiday special spun off from the the Disney animated feature film Frozen (itself inspired by Hans Christian Anderson's The Snow Queen).[1] Kevin Deters and Stevie Wermers-Skelton, who previously directed the Prep & Landing specials, directed the project, with Roy Conli as the producer,[2][3] thus making it the first animated Frozen project not directed by Jennifer Lee and Chris Buck, or produced by Peter Del Vecho. With Robert Lopez and Kristen Anderson-Lopez not returning to compose the songs, Kate Anderson and Elyssa Samsel took over.[4]

Although intended to premiere on ABC, Olaf's Frozen Adventure made its debut appearing with screenings of the Pixar film Coco from November 22th through December 7th of 2017 in the United States.[1] It was quickly removed from the theatrical showings due to negative reception regarding the film's length,[5] and made its televised premiere on ABC on December 14th as an episode of The Wonderful World of Disney. In the United Kingdom, the special was shown with screenings of Frozen on November 25 and 26.[6]

It is Christmas time in the Kingdom of Arendelle, and the castle is buzzing with excitement. It is also Elsa and Anna's first holiday since Elsa became Queen, and the sisters are going to throw a surprise party for the entire kingdom. Olaf, full of Christmas spirit, cannot wait for the celebrations to begin. The courtyard is soon filled with the townspeople. Kristoff and Sven wheel in the giant Yule Bell, which Anna and Elsa ring to officially announce the holidays to begin. However, instead of entering the holiday party, all the townspeople walk away as the castle doors open. The villagers are going home to enjoy their family traditions, and they did not want to intrude on Anna and Elsa's traditions. Kristoff tries to cheer up Anna and Elsa by sharing a tradition that he and Sven have always enjoyed with the Trolls. Sven brings in a mud troll named Flemmy, which everyone must lick the forehead to make a wish. However, Anna and Elsa are not keen to lick the troll. Following Anna and Elsa into the ballroom, Olaf wants to know about their favorite family tradition. Sadly, Anna and Elsa do not believe they have one, especially after the gates were closed and the two sisters became distant from each other. This makes Elsa blame herself for them not having a family tradition, and sadly leaves the room. Olaf does not like seeing Anna and Elsa upset, and suddenly comes up with an idea to find them a tradition.

Accompanied by Sven and taking Kristoff's sleigh, Olaf goes into town asking people about their family traditions. The first thing he sees is a family who make candy canes together each year. Olaf likes the family's tradition, especially when he is given a candy cone and instantly gets a sugar rush when he replaces his nose with it. However, there are still many more to find. Going from house to house, Olaf learns all about the different things families do together for the holidays. He puts something from every household onto the sleigh, and soon it is overflowing with wonderful traditions for Anna and Elsa. It is nearly dark by the time they get to Wandering Oaken's Trading Post and Sauna. Oaken greets Olaf and Sven, who both join the Oakens in their holiday tradition; relaxing in the family sauna. Afterwards, Olaf and Sven head back to the castle with a sauna on the sleigh. There are very pleased with all the traditions they found. As they make their way through the mountains, a hot coal from the sauna tumbles out and falls into the pile of traditions, setting the whole sleigh on fire. The burning sleigh drags Olaf and Sven down the mountainside. They are flung to opposite sides of the ravine as the sleigh goes over the cliff and explodes in the snow below. The traditions they found are gone, except for a fruitcake. Olaf tells Sven he will meet him back at the castle, and skips off into the dark woods. In the distance, Sven hears the howling of hungry wolves chasing Olaf. He races back towards the castle to get help.

Back at the castle, Elsa feels bad about walking away from Anna, and decides to go look for her sister. She finds her in the attic, looking through her old trunk from her childhood. She wants to know what is in Elsa's trunk, and finds it only full of gloves. Elsa lifts out a row of gloves and smiles slyly to herself as she spots something. She reaches into her trunk and pulls out a small wooden box with two tiny bells on it. She hands it to Anna and tells her to look inside. Anna opens the box, and her face brightens.

Meanwhile, Sven arrives back at the castle. He bursts into the stables and tries to tell Kristoff that Olaf is in danger, but does not understand. Anna and Elsa appear in the doorway, and instantly know what Sven is trying to say. Anna takes charge and orders everyone to gather for a search and rescue. Anna, Elsa, Kristoff, Sven, and an Arendelle search party head into the mountains in search of Olaf. Anna and Elsa call for their friend several times, but get no reply. Suddenly, the sisters hear a sad, familiar voice. Anna and Elsa look around and see a carrot sticking out of a large pile of snow. After pulling him out of the snow, Olaf tells them everything that had happened. He tells Anna and Elsa about the traditions he lost, and was sorry that he could not give them one. Anna shook her head, saying they did have a tradition. Anna shows Olaf the box, and inside is artwork of him. There were drawings and a sculpture. Elsa tells Olaf that it was him who brought them together and kept them connected when they were apart. Every year, Anna would make some artwork of Olaf and slip it under Elsa’s door. Elsa would then keep it all in a box. The sisters both treasured the artwork, because it reminded them of their childhood and of how much they loved each other. Olaf is delighted and surprised, because he now knows that Anna and Elsa had a holiday tradition after all; he was their tradition.

Kristoff, Sven, and the rest of the search party gather around, overjoyed to see Olaf safe and sound. Elsa wants to do something special to celebrate. She uses her magic to create a sparkling ice tree, and decorates it with lanterns from the search party. She also makes a star of ice around Anna's small Olaf sculpture. Then Olaf hangs it on top of the tree. Elsa and Anna are happy and grateful to be with family and friends. Elsa looks around and thinks Arendelle has a new tradition, to which Anna agrees and thanks Olaf.

In addition to those original songs, the short, alternate version of Jingle Bells is sung by Olaf at one point. Although, the score also incorporates the melody of the movie's song "Do You Want to Build a Snowman?" during the brief flashbacks sequence.

The special was first released on DVD in the United Kingdom on December 7, 2017, exclusively at Tesco stores.[7]

In the United States, the special was released digitally on December 19, 2017, with a Blu-ray/DVD combo pack release following on November 13, 2018. Both releases included the animated shorts Polar Trappers, Winter, The Hockey Champ, The Art of Skiing, Once Upon a Wintertime (a segment from the compilation film Melody Time), and Pluto's Christmas Tree. 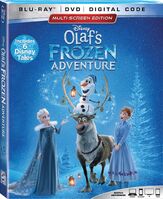 For the special's televised broadcast on ABC, the following edits were made for commercial time:

On the Digital and Blu-ray releases, the closing logos were omitted in favor of interval segments using custom promotional animations featuring Olaf (sometimes with Sven) to bring up the next short (excluding Pluto's Christmas Tree, which ends with its closing logo card).