Ginny Grainger (Mary Steenburgen) is the mother of two children, Cal (Magwood) and Abbie (Harnois). Her husband, Jack (Basaraba), has been out of work since June, and they have to move out of the company house by January 1. He enjoys fixing bikes in his basement and hopes to give one to his children's friend, Molly Monaghan, who is poor and that's all she wants for Christmas. Although he would like to open a bike shop of his own, doing so would use up all their savings, which Ginny sees as a foolish move. In order to make ends meet, she works as a cashier at a grocery store. Christmas is looming on the horizon which is causing even more trouble for Ginny and like Scrooge, she loses sight of the true meaning of Christmas.

One night, Abbie goes to the mailbox across the street to send a letter to Santa Claus. After she mails it, Gideon (Harry Dean Stanton), an angel who has been watching the Graingers, retrieves it from the mailbox and returns it to her saying that her mother should mail it. She agrees, and as she's crossing the street to return home, a car barrels down the road toward her. Gideon stops the impending accident and allows Abbie to cross the street without incident.

The next day, the Graingers visit Jack's grandfather. He gives the children presents: Cal a book his mother used to read to him and Abbie a snow globe of the North Pole. That night Gideon visits Abbie in her room only to learn that Ginny did not mail her letter to Santa Claus. While talking to her, he purposly drops the snow globe she has been given and it breaks, but then he magically repairs it. He says he can fix a glass ball, but not her mother. He tells her that some things are going to happen tomorrow and not to be afraid. Meanwhile, Ginny and Jack are in the kitchen talking about their finances. He reiterates his desire to open a bike business, but she feels that he should find a new job, as the time to start turning a profit from a business would be too long. Frustrated, he storms out of the house to go for a walk. She races after him to try to work things out. Ominously, all the Christmas lights begin turning off all around her, as to show that the last of the Christmas spirit has been drained from her.

The next day, Christmas Eve, Ginny gets a ride to work from a friend. They stop at a gas station, where she sees a man trying to sell some of his possessions in order to support himself and his son, with little success. She shrugs this situation off and goes on with her day. Jack goes to the bank to take some money out of their savings to do some Christmas shopping for the kids. The children are supposed to wait in the car, but Abbie sees the grocery store where her mom works and goes over to say 'hi'. Ginny asks where Jack is and she tells her he's at the bank. She storms out of the store to take Abbie back to the car and stop him, only to have her boss see her leave and fire her. She puts Abbie back in the car and enters the bank only to discover that the man who was trying to sell his possessions at the gas station is holding up the bank. Jack attempts to quell the situation, but the man shoots him. In a panic, the gunman flees the bank and hops into the family's car with Cal and Abbie still inside. Ginny realizes that the gunman just stole the car with the children in it, so she gets in his car and chases after him, but it runs out of gas before she can catch up with him. He comes to a bridge where the police have set up a road-block. He tries to swerve around it, but the car skids and swerves off the bridge into the river below.

After learning of the death of both her husband and children, Ginny returns home to an empty house, spirit broken, and weeps. Soon after, Jack's grandfather comes to inform her that the kids have been found standing on the side of the road. The police believe that the gunman dropped them off before the crash, when in reality Gideon had rescued them from the river. When they return home, Ginny informs them that their father has died and is not coming back.

Later that night, Abbie runs away to the town's Christmas tree in hopes of finding Gideon to ask him to bring back her dad. He tells her that he can't fix things like what has happened to her dad and that the only person who can bring him back is Santa Claus. Meanwhile, Ginny goes into a panic looking for Abbie, who has gone missing.

Gideon takes Abbie to the North Pole with him to talk with Santa Claus. He informs her that he too cannot fix what has happened nor can he bring the Christmas spirit back to Ginny, but she can. He then takes her through his factory which is run by "ordinary, nice people," not elves. In the mailroom, he retrieves a letter that Ginny had written to him when she was a child, and tells her that it may hold the key to helping her mother.

Gideon returns Abbie to her house and she gives her mother the letter. She reads it and finally realizes the true meaning of Christmas: to celebrate what you have and not what you want. She walks outside to the mailbox and mails Abbie's letter to Santa. Gideon appears next to her and says, "Good night, Ginny. Merry Christmas." She smiles and replies, "Good night, Gideon." Just then, all the Christmas lights begin to come back on and from around the corner, Jack reappears and she runs to hug him.

The next day, Ginny relives the events of that Christmas Eve, but this time with a different attitude. At the gas station she buys a camp stove from the would-be gunman who thanks her and wishes her a Merry Christmas. At the grocery store, she tells her boss that she won't be coming into work that day. He responds, "Go, and don't come back." He then smiles and says, "Until Thursday morning." Then she writes a check to Jack for the bike business and the kids give one to Molly. That night, she hears something downstairs and finds Santa putting presents under the tree. He then stops and looks at her and says, "Merry Christmas, Ginny." She smiles and with tear-filled eyes, finally says the words she has been unable to say for so long: "Merry Christmas!" 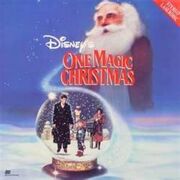 Retrieved from "https://christmas-specials.fandom.com/wiki/One_Magic_Christmas?oldid=38102"
Community content is available under CC-BY-SA unless otherwise noted.