Oona is Niko's mom. She has raised Niko on her own which has made her a strong independent woman. Nevertheless she dreams of adult companionship and having someone dear to share everyday life and the challenges of having a pre-teen boy. Sometimes Oona regards to whether Niko's father is a good solid role model for the boy to grow up alongside.

Oona first appears when she watches Niko watching the Flying Forces test flying. She later appears that night where she tells Niko about the night she met his father.

The next day, Oona is seen with her father and the herd's leader, when Niko and his friend and the leader's daughter Saga arrive and tell them they saw wolves, but say that they lost them. Just then, a wolf named Smiley arrives and tries to attack the herd, but they flee while the Leader knocks Smiley to the ground. The Leader deals with Smiley, but is injured in the process.

That night, when Grandpa scolds Niko for leading Smiley to the herd and causing the Leader to get injured, Oona steps to her son's defence and says that Niko is just a boy and the wolves will return and there will be many. Oona goes with the herd to find a new home and tells Julius that she will stop talking about Niko's father and the Flying Forces, unaware that Niko hears her. After noticing that Niko isn't with the herd, Oona wishes to go back to Home Valley, but the Leader is against this, as he is worried that she may lead the wolves to them, so Julius says he will find Niko.

Oona is later seen with the herd when Julius returns and tells them that Niko can fly and has joined the Flying Forces. However the herd don't believe him and Oona is angry with Julius for not finding Niko. Just then, Niko flies to the herd with Wilma and reunites with Oona. She then witnesses Niko turn down an offer to join the Flying Forces (including Niko's father Prancer) to remain in the herd, but says he will visit after Christmas.

Oona reappears in The Flight Before Christmas's sequel, which takes place a year after the previous film. In the film, Oona has married a reindeer named Lenni and becomes stepmother to his young son Jonni.

Oona and her son Niko

Oona and her husband Lenni 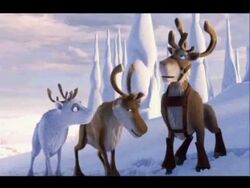 Oona, Lenni and Prancer
Add a photo to this gallery

Retrieved from "https://christmas-specials.fandom.com/wiki/Oona?oldid=143945"
Community content is available under CC-BY-SA unless otherwise noted.