In the series' first Christmas special, "Christmas Who?", Patrick is enticed when SpongeBob tells him about Santa Claus and thinks of Santa as being like a genie. He attempts to write a letter to Santa, but his method of writing involves putting the pencil (or "writing stick" as he calls it) between his legs and moving the paper on top of it to write, which always results in the paper getting ripped and him asking SpongeBob for another piece. When SpongeBob starts sending everyone's letters to Santa up to the surface, Patrick says he is wishing for another piece of paper, because he has again ripped his current piece with his pencil, despite that SpongeBob has already shown him the proper way to write a letter.

Later, Patrick helps out with SpongeBob and the other citizens of Bikini Bottom to get ready for Santa's arrival, including decorating Squidward's house and being the star on a Christmas tree during their musical number, and is naturally disappointed when Santa doesn't show up ("Never trust a genie"). At the end of the story, Squidward (disguised as Santa) gives Patrick his clock, which Patrick punches his arm through and calls a wristwatch.

In the series' second Christmas special, "It's a SpongeBob Christmas!", Patrick reveals to SpongeBob early on that he wants Santa to stop the clocks so that they can have Christmas all year long. Over the course of the special, Patrick tries to set traps for Santa to get caught in, only to get himself caught in them. At the end of the special, when Santa is leaving Bikini Bottom, Patrick stows away on his sleigh and tries to nab the big guy with a net, which results in the sleigh being thrown off course.

In addition, Patrick made a few starring appearances in the Merry Nickmas interstitial shorts. His most prominent appearance in these shorts is "Patrick the Snowman" (a parody of Frosty the Snowman), in which he plays the role of a snowman built by the kids from The Adventures of Jimmy Neutron and brought to life by Jimmy Neutron's Spoofinator 4000. He quickly grows to annoy the kids so much that they send him 70 years into the future (despite Cindy Vortex's suggestion that they just melt him instead); once there, he annoys the elderly-aged versions of the kids. (Coincidentally, Bill Fagerbakke, Patrick's voice actor, would provide the voice of Frosty himself in The Legend of Frosty the Snowman).

Patrick also appeared as The Abominable Starfish of the North (a parody of the similarly-named character from Rudolph the Red-Nosed Reindeer) in the "Holiday Party" short, and is also featured at the end of "The 12 Days of Nickmas" as the "starfish on a pine tree" described in the lyrics ("Hmmm... pointy."). 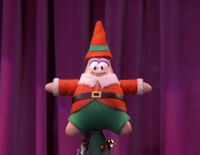 Patrick in Rankin/Bass-styled stop-motion animation from "The 12 Days of Nickmas". 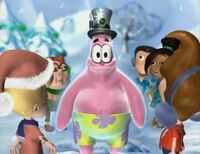 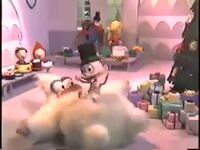 Patrick as the Abominable Starfish in "Holiday Party".