Pee-wee's Playhouse Christmas Special is a Christmas television special based on the American Saturday-morning children's program Pee-wee's Playhouse. The special is a variety show that features a number of celebrities of the time as well as several musical numbers, educational segments, and segments commonly found in the show: a secret word ("year"), connect the dots with the Magic Screen, a visit from the King of Cartoons, a clay animation Penny cartoon, etc.

It is Christmas Eve of 1988 and Pee-wee, with the help of his robot pal Conky 2000, has spent a great deal of time creating an abnormally large Christmas list for Santa. Only after Miss Yvonne stops by the Playhouse (wearing a new hairdo and a beautiful Christmas dress) to drop off a Christmas fruitcake does Pee-wee realize that he hasn't yet decorated for the holidays. Thankfully, Pee-wee's genie Jambi grants his wish that the playhouse be magically decorated, though the man-child decides to tack on an extra wish that is going to be granted later.

As the special continues, various characters from the show as well as various celebrity guest stars stop by to visit Pee-wee - for instance, Cowntess the Cow arrives with pal Zsa Zsa Gabor, the Magic Screen's cousin Magic Johnson makes an appearance, and Jewish neighbor Mrs. Rene gives a short lesson on Hanukkah and the dreidel.

At the end of the special, Santa arrives and informs Pee-wee that since his list was so large, there wasn't room on the sleigh for any presents for the other kids of the world. Although he initially acts selfishly and conceitedly (much to his friends' and viewers' displeasure), Pee-wee decides to give up all of his presents so all the rest of the children on Earth and their families and friends can have a merry Christmas - after all, "Christmas is the time when we should be thinking of what we can do for others." Pee-wee then uses his extra wish from Jambi to wish for peace on Earth and that everyone will have a Merry Christmas and a Happy New "Year".

This special was released on VHS and Laserdisc by Hi-Top Video in 1989, and again by MGM/UA Home Video (through Warner Home Video) in 1996. The special made its DVD debut in 2004, when it was released on the format by Image Entertainment. It was also included in Image Entertainment's Pee-Wee's Playhouse: The Complete Series set, and made its high-definition debut on the Blu-ray set of the same name, released by Shout! Factory on October 21, 2014. Shout! Factory would later give the special its own individual Blu-ray release on October 6, 2015. 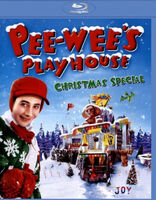 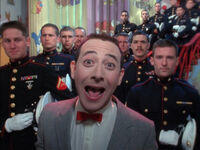 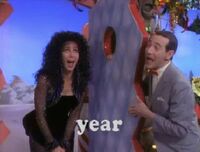 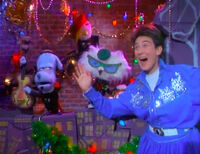 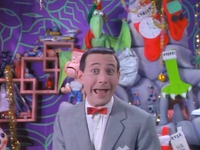 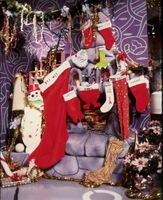 Retrieved from "https://christmas-specials.fandom.com/wiki/Pee-wee%27s_Playhouse_Christmas_Special?oldid=153491"
Community content is available under CC-BY-SA unless otherwise noted.