Pete is a character created by The Walt Disney Company, and the main antagonist in the Mickey Mouse cartoons. He is a large overweight cat, sometimes depicted with a peg leg. Though usually associated with the Mickey Mouse universe, Pete first appeared in Disney's Alice Comedies three years before Mickey's debut, and is Disney's oldest recurring character. 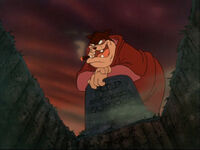 Pete as the Ghost of Christmas Future in Mickey's Christmas Carol.

Pete in Mickey's Once Upon a Christmas. 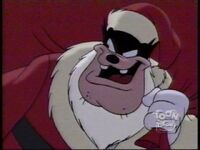 Pete dressed as Santa Claus in "Pete's Christmas Caper".
Add a photo to this gallery

Retrieved from "https://christmas-specials.fandom.com/wiki/Pete_(Disney)?oldid=161845"
Community content is available under CC-BY-SA unless otherwise noted.