VHS
DVD
Apple TV
Amazon Video
Pinocchio's Christmas is a 1980 Christmas television special produced by Rankin/Bass, based loosely on the novel The Adventures of Pinocchio by Carlo Collodi.

It is Pinocchio's first Christmas, and Geppetto is trying to figure out how to buy a Christmas present for his son, so he sells his boots to a used shoe store and uses the money to buy an arithmetic book, which he gives to Pinocchio early. Pinocchio, however, brings the book back to the bookseller for five copper coins, which he decides to use to buy a present for Geppetto. However, he soon runs into the Fox and Cat, whom he thinks are his only friends. The Fox and Cat convince Pinocchio that he should bury his five coins in the snow, and when the sun sets, they will grow into a Christmas tree covered with lots of gold and silver coins. Pinocchio does exactly that, and then, while he's not there to pay attention, the Fox and Cat dig the coins out of the ground before he returns.

When Pinocchio returns and finds that the tree didn't grow, he takes part in a local Christmas marionette show run by Maestro Fire-Eater, where he is given the stage name of Sir Larry Olive-Tree. During the show, he befriends a non-sentient female puppet of Fire-Eater, named Julietta. After the show, Fire-Eater tells Pinocchio that he needs to change the Julietta puppet to resemble one of the Three Wise Men for a Christmas pageant next week. But Pinocchio runs off, taking Julietta with him, and Fire-Eater calls a nearby gendarme to chase after him.

Pinocchio manages to elude the gendarmes and brings Julietta with him to the Forest of Enchantment, which he recognizes as his birthplace. Pinocchio explains his backstory - how he was cut down as a log from an enchanted tree and sold to a master carpenter named Mr. Cherry, who sold him to Geppetto, who built Pinocchio into a marionette and raised him as his son. Pinocchio then describes how he always ended up getting into trouble and no one in the village ever got along with him, except for the Fox and Cat who have been teaching him to tell lies and play hooky. He also mentions his first encounter with the Talking Cricket, who tried to lecture him about being a good boy until Pinocchio tossed a book at him. As he finishes his flashback, Pinocchio expresses sadness at the idea that he may never see his father again. Just then, the Fox and the Cat show up, telling Pinocchio they know how he can bring Julietta to life using a secret medicine, which he can only find if he goes on a sleigh ride over seven mountains and seven valleys.

Before Pinocchio can get started on that journey, though, a blue light appears, calling out his name. It is soon revealed that the blue light is a fairy named Lady Azora, who planted the seed that grew into the tree Pinocchio was originally born on. She brings in a doctor, whom Pinocchio recognizes as the Talking Cricket he met before. Pinocchio attempts to explain his terrible action of stealing Julietta from Fire-Eater by lying, which causes his nose to grow. Upon seeing what has happened to his nose, Pinocchio tells the truth and it goes back to normal. Azora tells Pinocchio that the only gift he really needs to give Geppetto is love, for that is the greatest gift anyone can give. With that, Pinocchio leaves Julietta in Lady Azora's care, and Dr. Cricket goes to make sure Pinocchio stays out of trouble.

Pinocchio starts making his way home, but he suddenly again runs into the Fox and Cat, who say that he should go to the North Pole and get a job teaching Santa Claus's toys how to dance (the fantasy song sequence that follows was cut from the special's broadcasts on ABC Family). They bring Pinocchio to a coachman they were speaking with earlier; the coachman wraps Pinocchio up in a gift box and sells it to a Duke who needs a present to give to his children, whom he does not spend much time with. When the kids open up their present, Pinocchio tells the Duke that he should stay home with his kids for Christmas.

Afterward, Santa Claus arrives in his sleigh and brings Pinocchio and Dr. Cricket back to Geppetto's workshop, where Pinocchio is joyously reunited with his father and promises to always be a good boy. Lady Azora then arrives with a now-sentient Julietta, and they all sit down to Christmas breakfast. During the meal, Lady Azora tells Pinocchio that while he may have many other misadventures (such as getting turned into a donkey and getting swallowed by the Terrible Dogfish), he will never again stray from the path of being a good boy, and eventually, he may one day turn into a real human boy.

This special originally aired on ABC. It was re-aired annually on ABC Family (and its predecessors) from the 1990s through 2013, and appeared again in 2015, before dropping from the network entirely. As of 2020, it currently airs on the AMC channel as part of their Best Christmas Ever block.

Pinocchio's Christmas has been released on VHS at least twice over the years, originally by Vestron Video and later by Warner Home Video. Currently, it has never had its own individual DVD release, but it was made available on Warner's Classic Christmas Favorites DVD box set in 2008, and on the Santa's Magical Stories DVD box set in 2011, both times sharing its disc with How the Grinch Stole Christmas! and The Leprechauns' Christmas Gold. Its most recent DVD release was in the Rankin/Bass TV Holiday Favorites Collection manufacture-on-demand DVD, released by Warner Archive on July 30, 2012. 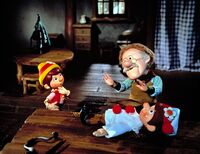