Christmas Specials Wiki
Register
Don't have an account?
Sign In
Advertisement
in: Specials, Disney, Originally aired on ABC,
and 5 more

Prep & Landing: Naughty vs. Nice is a computer-animated television special produced by Walt Disney Animation Studios and directed by Kevin Deters and Stevie Wermers-Skelton. Originally aired on ABC on December 5, 2011 (and on Disney Cinemagic on December 24th in the United Kingdom), it is a sequel to the 2009 special Prep & Landing. Along with its predecessor, it has aired annually on ABC ever since, and was also aired as part of the 25 Days of Christmas on sister network Freeform through 2020.

As the special begins, we are introduced to the Coal Elf Brigade, a special unit of Christmas elves who are responsible for delivering lumps of coal to naughty children (with small notes attached, encouraging the recipients to try to be nicer next year). However, in the middle of a mission by one group of these elves, they are ambushed, and during their escape, their Fruitcake Conduct Calculator is stolen by the child who lives in the house they were examining.

The following year, Wayne and Lanny are informed that they have to recover the lost Conduct Calculator, as it is now in the hands of a hacker, identified only as "jinglesmell1337", who is now trying to access their way into the Naughty/Nice List database. Magee informs the duo that, at Santa's insistence, they will also need the foremost Naughty Kid expert to aid in the mission - Noel, a bombastic member of the Coal Elf Brigade who also happens to be Wayne's estranged younger brother. Reluctant to take his extroverted brother along with him, Wayne relents, and Noel joins him and Lanny on their mission. During the trip, Noel reminisces about his and Wayne's childhood, when they worked together far better than they do now.

As the trio arrives at the hacker's house, Wayne sets off a trap, imperiling the entire team; Wayne takes a particular beating while Noel is able to defend himself. Lanny, however, is able to infiltrate the hacker's room, only to accidentally be knocked out by his own sparkle ornament and taken captive. The hacker then reveals herself to be Grace Goodwin, whose sole mission is to get herself off the naughty list. She believes that she has been put on the list by mistake because of her toddler brother, Gabriel, who had destroyed her favorite Miss Whiskers toy and ruined her chances of asking Santa for a new one with his crying. After a somewhat intoxicated Lanny suggests using the "magic word", she does just that: using the word "please" as the password into the Naughty/Nice List database (since genuinely naughty kids never say "please"). At first, Grace appears successful in changing her status from naughty to nice, but unbeknownst to her, a technical hiccup causes the Conduct Calculator to start transferring everyone to the naughty list.

Meanwhile, Wayne is particularly bitter at being "shown up" by his younger brother, especially after Noel manages to recover the Conduct Calculator. This prompts a fight between the two in the street in front of Grace's house in which Wayne wishes he never had a brother. Shocked at his statement, Noel (who always idolized Wayne growing up) asks Wayne to say he didn't mean it, then throws what he had intended to give Wayne as a Christmas present at him. The gift - the Captain Avalanche Super Sled, a toy that Wayne had wanted as a boy but was never able to get - prompts Wayne to reconcile with Noel, and also gives Grace, who was watching their argument, a newfound appreciation for her younger brother.

Just then, Magee and Mr. Thistleton call Wayne to inform him about everyone being transferred to the Naughty List due to Grace's hacking. Since the Fruitcake Conduct Calculator's antenna is damaged, Wayne and Noel will have to attach it to the biggest antenna they can find in order to reverse the damage. Grace, regretting what she did, assists the elves in their new mission by rewiring the Conduct Calculator back to its original state. Afterward, Wayne and Noel make their way to a powerful antenna in the middle of the city and, using the grappling hook attachment from the Super Sled toy, manage to attach the Conduct Calculator to the antenna, thus fixing the Naughty/Nice List database.

The next morning, the scene at the Goodwin house shows Gabriel giving Grace, now more appreciative of him, her new Christmas present - a replacement Miss Whiskers for the one he had destroyed a year prior. Meanwhile, back at the North Pole, Wayne and Noel both win the Elf of the Year award for their efforts and cooperation (although the headline in the local newspaper misprints Wayne's name as "Dwayne").

The special was made available, along with the original Prep & Landing special, on the Prep & Landing Totally Tinsel Collection DVD and Blu-ray, released on November 6, 2012. 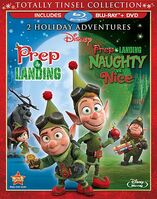 Note: Mrs. Claus and Miss Holly appear at the end, but do not have speaking parts.