It is Christmas Eve in Adventure Bay, and the PAW Patrol are busy decorating a large Christmas tree outside the Lookout for Christmas, and are also excited for Santa Claus coming that night. With the aid of Marshall's ladder, they are able to decorate the upper parts of the tree as they sing their own version of "Deck the Halls" while they do so. Skye adds the star on top via her Pup Pack. Afterwards, the pups retire to bed to prepare for Christmas morning.

That night, a snowstorm looks to be blowing in as the pups are tracking Santa via radar in the Lookout, but upon seeing the storm, grow worried, but Ryder is confident Santa will make it through the storm no problem, though he voices his own concerns after the pups are out of earshot that Santa might be in over his head. The pups are excited and want to stay up to see Santa, especially after laying out treats for him and his reindeer, despite Rubble and Zuma accidentally eating the first batch, but Ryder doubts they can since he tries to do the same but falls asleep every year. He is soon proven right when most of them fall asleep, and soon, Marshall is the last to join them after struggling to remain awake a little longer.

Outside, Santa is struggling through the storm with his reindeer and sleigh, as it is preventing him from getting any altitude above the treetops because of the strong winds and heavy snow, despite his best efforts to attempt it. He soon brushes against the treetops and loses the bags containing the presents, clips the roof of Farmer Yumi's barn, causing him to lose the Christmas Star that keeps his sleigh and reindeer airborne, which bounces off the roof and lands on Bettina, and soon crashes into the snow, where the reindeer run off in fright, much to his frustration and sadness.

Back at the Lookout, Ryder is watching the radar, when Santa's beacon is lost upon being covered by the blizzard, much to his concern. His Pup Pad soon rings, and as he wonders who it could be, it is revealed to be Santa himself, asking for Ryder's help. Ryder cannot believe that Santa Claus himself is calling him, asking for help. Either way, as Santa explains, without the presents, the Christmas Star, or the reindeer, Christmas will have to be cancelled since Santa will be unable to complete his trip. Ryder is horrified, but when Santa asks him for help and reminds him of the PAW Patrol motto of "No job is too big, no pup is too small," Ryder is ready to help and summons the pups.

Once topside, the pups are still drowsy from being woken up, but when Ryder reveals the situation about Christmas being in danger for the whole world, the pups are fully awake in a hurry, and become just as worried and horrified about what has happened to Santa. Ryder makes it clear that he needs all the pups for helping save Santa and Christmas. The team deploys, and soon split up: Ryder, Rocky, and Rubble find the remains of the sleigh, and set to work mending the broken runner, while Skye finds one of the lost bags of presents stuck in a tree, which is soon retrieved by Marshall and Chase, despite Marshall landing in the snow when Chase caught the presents with his net, but missed catching Marshall as well.

Soon, Skye, Marshall, Chase, and Zuma return with all the gifts, and while repairs on the sleigh continue, Skye, Marshall, and Zuma will take care of delivering the gifts to Adventure Bay's residents, while Chase sets about hunting down and rounding up the reindeer. He soon finds Prancer, after having some trouble guessing the right name, and herds him back to the sleigh, then goes for the rest.

With the presents, Skye delivers to Katie and Cali at the Pet Parlor, startling Cali when her present lands next to her, though she then begins playing with the ribbon from the top of the gift, Marshall does Mayor Goodway and Chickaletta at City Hall, where he gives Chickaletta her gift, which she happily starts pecking into, and Zuma is interrupted delivering to Cap'n Turbot on Seal Island by Wally, who only wanted his Christmas present himself, which Zuma gladly delivers to him.

The sleigh is soon repaired, but when Ryder calls Santa, he is still looking for the Christmas Star, before the rest of his call is muted by a fresh wind from the snowstorm. Checking the radar, they find the star landed at Farmer Yumi's. When they arrive, they find that the star landed on Bettina, causing her to fly like a reindeer, but mostly above the barn as she has no idea what is going on. Luring her back to the ground with some hay, Rocky retrieves the star, and Ryder lets Santa know they have got the star and will meet him back at the sleigh. Meanwhile, Chase is still having trouble rounding up the reindeer as they keep running off in another direction, be it one or several of them, but the aid of his megaphone finally gets them to cooperate.

Once back at the sleigh, Santa returns the star to its spot on the front of the sleigh, and the magic is restored. The pups soon climb aboard, and while amazed at being in Santa's sleigh, they unintentionally are taken for a ride in it when Marshall tells the reindeer "Dash away all." The pups enjoy the ride through the sky, before Santa whistles for the reindeer to return to Earth, as he needs to get a move on as he is behind schedule as it is. With a final cry of "Merry Christmas, PAW Patrol! And thank you!" Santa departs to resume his journey.

Back at the Lookout, Rubble is worried at how Santa has not left them any presents as he circles the Christmas tree with whimpers and whines, but the other pups assure him that helping save Christmas for the whole world was the greatest Christmas ever, presents or no presents. Ryder soon reminds the pups they need to get to bed for Christmas morning, and the team retires to the Lookout for the night to get some much needed sleep.

Christmas morning, the team awakens to find that Santa returned on his way home to the North Pole and left them presents under the tree for them after all as thanks for helping him out. The pups are excited to open their gifts, but Skye tells them that Ryder gets the first one, and they all agree. The gift Ryder gets from the pups is a large bone, and while he is grateful to the pups for the gift, noticing their hungry expressions, he returns the generosity by letting the pups have the bone instead, ending the episode as the pups and Ryder enjoy Christmas morning, and the knowledge of how they helped save Christmas for the entire world as well with helping out Santa Claus. 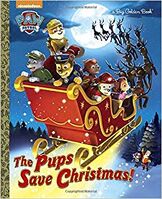 The cover to the storybook adaptation

The inside of the storybook
Add a photo to this gallery 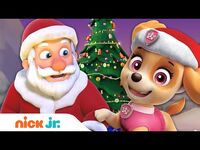 Retrieved from "https://christmas-specials.fandom.com/wiki/Pups_Save_Christmas?oldid=185152"
Community content is available under CC-BY-SA unless otherwise noted.