Rainbow Dash is a character from the My Little Pony toy line and related media. She is a tomboyish Pegasus Pony who originally debuted as an Earth pony in 2003. In the franchise's third generation, she was described as a stylish pony who likes rainbows and shopping.

The current incarnation of the character, seen in My Little Pony: Friendship Is Magic, is very fast and works with the other pegasi to move clouds to control the weather. Her lifelong dream is to join the Wonderbolts, Equestria's aerobatic flight team. She was accepted into their training program and selected as cadet team leader. She becomes a full member later in the series. Rainbow Dash's signature move is the Sonic Rainboom, in which she flies fast enough to break the sound barrier, creating a sonic boom and a rainbow-hued shock wave. 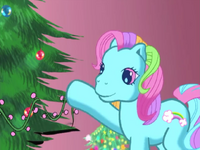 Rainbow Dash as she appeared in A Very Minty Christmas. 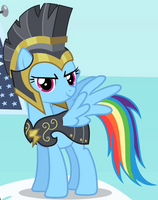 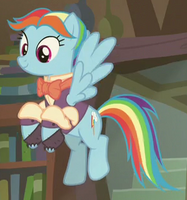 Rainbow Dash as Snowdash in "A Hearth's Warming Tail".
Add a photo to this gallery

Retrieved from "https://christmas-specials.fandom.com/wiki/Rainbow_Dash?oldid=172022"
Community content is available under CC-BY-SA unless otherwise noted.