Richard "Richie" Richard and Edward "Eddie" Elizabeth Hitler are the main characters in the 1991-1995 sitcom Bottom, it's live stage shows and it's film Guest House Paradiso.

At 3:30am on Christmas Day, Eddie awakens to hear Deck the Halls blaring from an aged tape recorder before Richie comes in dressed as Santa Claus and leaves presents. Eddie had earlier laid a trap in his bedroom, causing "Santa" to be suspended in the air and is only let down when he gives Eddie £10. "Santa" leaves the bedroom and comes back as Richie seconds later and starts to open the presents, ignoring Eddie's protests to go back to bed and open the presents at 7:30am. The presents Richie has are ingredients for Christmas Lunch, whilst all Eddie gets is an empty small child's sock.

Eddie's present to Richie is a play telescope made from a used toilet roll with a picture of Sue Carpenter attached to the end of it. (In the extended episode, Richie gives a portrait of himself to Eddie, who after going downstairs, smashes Richie's head through it, causing Richie to accuse him of being a philistine and says that it took him 15 minutes to paint the portrait). Richie then stops Eddie from watching the television, saying that they not watching it until The Queen's Speech (unless there is a Bond film on) before going to prepare Brussels spouts for the guests that are coming later (despite neither of the duo liking sprouts). Richie does the cooking whilst Eddie makes their flat "Christmassy". Richie prepares to make brandy butter for a Christmas pudding, but learns that Eddie has drank all the brandy, but Eddie produces from the fridge, a substitute: Vodka margarine which he spiced up with a couple of cans of hairspray. (In The extended version, Richie berates Eddie for not getting a Christmas Tree, but Eddie says he has, but brings in a twig which cost £16).

Unfortunately, Richie accidentally chops off his right index finger and is strangled by Eddie to reduce the blood flow, until Richie punches him off. Eddie finds Richie's finger and plays around with it until Richie snatches it back and is relived that it still works and Eddie staples it back on but ends up stapling Richie's hand to the dinning room table in the process. (In the extended version, Eddie tries to light up the "Christmas twig" with mains bulbs, on,y for it to catch fire and is thrown out the window, before Eddie accidentally closes the window on Richie's reattached finger).

Richie then zaps Eddie in the groin with a lamp before going to answer the door to let in their guests who turn out to be Eddie's friends Dave Hedgehog and Spudgun. Due to Eddie drinking all the sherry, Richie forces him, Dave and Spudgun to drink gravy (much to Spudgun's dismay) before they sit down for Christmas Lunch. However, it appears Richie isn't a very good cook as the potatoes as so hard they break the plates and the turkey is shrivelled and burnt. Richie then puts the vodka margarine onto the Christmas pudding and sets it alight causing it to produce powerful flames and results in Eddie spraying the table with fire extinguisher. The quartet (with Eddie, Dave and Spudgun donning paper crowns) then go to the living room where Richie does charades, but an annoyed Eddie puts a stop to it, saying that they've all got Goldfinger and pack it in.

Just then, the doorbell rings and an annoyed Richie goes to answer it, thinking it is charity collectors, but finds a baby there instead. Richie brings the baby inside, causing Eddie to tell him to get rid off it, fearing it will come between them and asks Richie why couldn't he be more careful. Feeling sorry for the baby for having nothing for his first Christmas, Spudgun gives him his Terry's Gold chocolate. Eddie also gives into guilt and gives the baby a Frankenstein's Monster mask whilst Dave gives the baby his bottle of aftershave called Grrr. Richie suddenly sees a pattern: "Gold Frankenstine and Grrr and your all wearing crowns" then upon noticing that he's wearing the baby's blue towel on his head says "and I'm a virgin". This causes Richie to believe that this incident is The Second Coming.

Eddie does not wish for the arrival of the son of God to ruin his Christmas, only for Richie to berate him and think up Ten Commandments. Just then, Richie and Eddie's landlord Mr. Harrison arrives and reveals that the baby is his grandson Johnny, who was left in a hurry by Harrison's daughter as her mother had a heart attack. Just then Harridon's daughter arrives and notices that Johnny is hungry and asks Richie and Edie if she may breast feed him in the flat. They agree and then shout "Merry Bloody Christmas" as they watch her unbutton her top to breast feed Johnny. 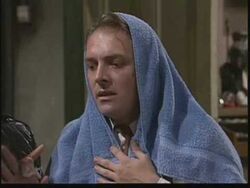 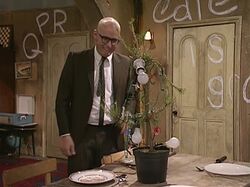 Eddie
Add a photo to this gallery
Retrieved from "https://christmas-specials.fandom.com/wiki/Richie_and_Eddie?oldid=111517"
Community content is available under CC-BY-SA unless otherwise noted.