Robbie the Reindeer
Robbie is the titular protagonist of the Robbie the Reindeer films. He is the son of Rudolph and an unknown doe, the love interest, later boyfriend and eventual husband of Donner and the brother-in-law of Em.

In his debut special Hooves of Fire, Robbie arrives in the town of Coldchester in the North Pole to become navigator for Santa Claus's sleigh team. Upon arriving at the sleigh team's home Reindeer Lodge, he is greeted by the team's captain, Blitzen, who introduces him to the rest of the team. Robbie demonstrates his nose's tracking abilities, but is dismayed when he learns that all the team does for the other 364 days of the year is exercise. When showing Robbie to his room, Donner asks him why is he here if he's not into exercise. Robbie tells her that his father sent him to do character building as he is easily distracted, which is proven true when he falls in love with Vixen, much to Donner's dismay (as she has developed feelings for Robbie). Unbeknownst to Robbie, Blitzen is planning to get him off the team out of jealousy of Robbie's father for being more famous than him.

A month later, Santa Claus shows the team his new sleigh, which has a talking ashtray, a stereo and a GPS (added by Blitzen to stop Robbie from joining the team). Seeing this, Robbie thinks he's off the team, but Santa assures him that Blitzen has come up with an idea about which reindeer to leave behind: the one that is most unfit. That night, after Blitzen puts more pressure on him, Robbie believes himself to be the most unfit and decides to head for home, only to end up being frozen in ice. He is found by a group of elves who at first wish to eat him, but after seeing that he's alive, they instead put him in their employ. However, Robbie is not good at the jobs he is given and gets demoted to being a forklift. One day, Donner finds him and tells that there is a way for him to get back on the team - by winning the Reindeer Games. Donner also tells Robbie about Blitzen's hatred for him and finds him a coach, named Old Jingle.

After months of training, Robbie prepares to take part in the games' most important event - the Steeplechase. After Robbie saves Santa's baby son from being crushed by a falling walrus, Vixen tries to use Robbie's crush on her to stop him from taking part, as she wants Blitzen to win so he can become famous and take her out of "this dive," but Robbie refuses and is now in love with Donner. Just before he can go to the race, Robbie is told by the head elf that Old Jingle is trapped under his house. He saves Old Jungle and returns to the race where he is neck-and-neck with Blitzen, who knocks him down with a hurdle. Luckily, Robbie catches up with him by using a technique taught to him by Old Jingle - the Nose Jump. Blitzen appears to win the race, but his celebrations are cut short when it is discovered that he took a drug before the games, and he is disqualified and arrested. Thus, Robbie is made winner by default, and Santa gives Robbie the sleigh for the night, which he uses to take Donner on a date to the moon.

Robbie's adventures continued in two sequels - Legend of the Lost Tribe and Close Encounters of the Herd Kind. In Legend of the Lost Tribe, Robbie and the other reindeer now run a bankrupt holiday resort. While rescuing a tourist, Robbie falls of a cliff and is rescued by a Viking, who then disappears. Meanwhile, Blitzen returns and captures the reindeer, turning them into robots with special remote-controlled hats. Robbie is the only one to escape, and he seeks the aid of the last remaining Viking tribe (whose diminutive members are all named "Magnus"). He brings them out of their shame and they agree to help. He discovers that the reindeer have been put into an exhibit at Blitzen's theme park. Robbie rescues them and Blitzen is once more jailed.

In Close Encounters of the Herd Kind, Robbie and Donner's wedding is put on hold when he learns that the Earth is about to be destroyed by evil aliens called the Nargathrons. Robbie saves the day again though with the help of his friends and an alien crystal.

Robbie gets kissed by Donner 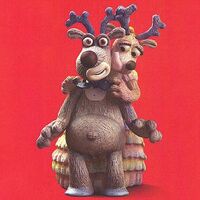 Add a photo to this gallery
Retrieved from "https://christmas-specials.fandom.com/wiki/Robbie_the_Reindeer_(character)?oldid=142714"
Community content is available under CC-BY-SA unless otherwise noted.