Richard John "Dick" Grayson is a superhero that appears in comic books published by DC Comics. Created by Bob Kane and Bill Finger and illustrator Jerry Robinson, he first appeared in Detective Comics #38 in April 1940. He was the youngest in a family of acrobats known as the "Flying Graysons", but after his parents were killed by a mafia boss in order to extort money from the circus that employed them, Bruce Wayne/Batman takes him in as his legal ward and eventually as his crime-fighting partner Robin. Eventually, as Dick grows older and spends more time as the leader of the Teen Titans, he retires as Robin and takes on his own superhero identity, Nightwing, to assert his independence (others would fill in as Robin).

The Adventures of Batman 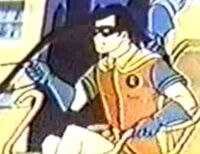 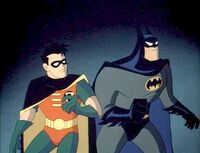 Robin with Batman in "Christmas With the Joker". 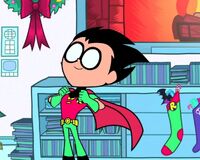 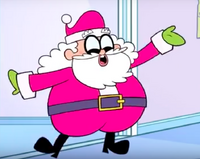 Robin as Santa
Add a photo to this gallery

Retrieved from "https://christmas-specials.fandom.com/wiki/Robin_(Dick_Grayson)?oldid=116219"
Community content is available under CC-BY-SA unless otherwise noted.