Robot Santa Claus is the version of Santa Claus who appears in the Christmas-themed episodes of Futurama. He is a four-ton robot designed by The Friendly Robot Company in 2801 to judge whether people were naughty or nice and sort out presents accordingly. Due to a programming error, his standards were set way too high, and he invariably judges everyone naughty (with the exception of Dr. Zoidberg) at least once. Every year on Christmas X-mas Eve, Robot Santa comes to Earth on his robot-reindeer sleigh to punish the naughty with extreme prejudice. It's said if someone is on the naughty list, and Robot Santa finds him or her, he will chop his or her head off and stuff his or her neck holes with toys from his sack of horrors. Usually though, he kills them using a variety of X-mas-themed murder devices and heavy ordnance.

When not on his X-mas mass murder spree, he spends most of the year in his impenetrable ice fortress at the North Pole of the planet Neptune, where he watches the people of Earth doing naughty things on a series of giant monitors, Big Brother style. A shantytown village named Jolly Junction lies at the base of his fortress, inhabited by unpaid, undersized, and underfed elf-dressed Neptunians.

Robot Santa Claus has proven quite resilient, having survived burning spaceship exhaust, explosions, and even survived listening to logical paradoxes, something, which destroys other robots, thanks to "paradox-absorbing crumple zones" built into his head.

Robot Santa Claus, though hostile to nearly everyone, apparently has friendly acquaintances with Kwanzabot and the Chanuka Zombie. 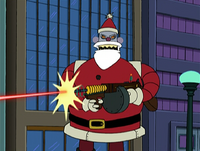 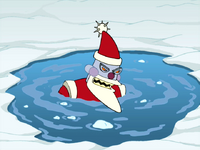 Robot Santa Claus trapped in ice. ("A Tale of Two Santas")
Add a photo to this gallery

Retrieved from "https://christmas-specials.fandom.com/wiki/Robot_Santa_Claus?oldid=116721"
Community content is available under CC-BY-SA unless otherwise noted.