It is December in O-Town, and Rocko is hoping for snow, something the city never gets. He brings his sled out, but the anthropomorphic cloud above his house can only produce one flake, which hits him in the eye. As Rocko recovers from that, he suddenly notices a moving van loaded with Christmas decorations. This inspires Rocko to go buy some Christmas decorations and invite his friends, Heffer and Filburt, for a Christmas party, and he assures his dog Spunky that it will be the best Christmas ever - at which point it starts raining. Meanwhile, Rocko's grouchy neighbor, Ed Bighead, is glad that there isn't going to be any snow. His wife, Bev, tells him to lighten up and enjoy Christmas for once. Ed notices the moving van and tells Bev that he won't tolerate the new neighbors.

Rocko invites Heffer and Filburt, but they end up inviting their families and friends. After some hesitation, Rocko gladly allows them to. After delivering the invitations, he goes to the mall for supplies. Along the way, he encounters an elf who is one of the new neighbors; he tells him that he's welcome to the party. He is shy and initially runs away, but then secretly follows Rocko.

Rocko purchases a tree from Heffer and Filburt, who are working as salesmen. (The tree is apparently alive before Heffer cuts it down.) At the mall, Spunky wants to sit on Fruitcakeman's lap, but Rocko tells him the line is too long. The elf whom Rocko encountered earlier attempts to purchase some shoes, but he is harassed by the business clerks. Rocko sees this and comes to the elf's rescue.

When Rocko brings him home, they are greeted by the elf's father, a sarcastic older elf who invites them inside. Inside, Rocko discovers that they are all elves and working on new toys, including a robot Santa Claus who almost kills him with his eye lasers. The head elf introduces his children, all of whom are named after tools (except for one named Mango), and tells Rocko about Mitch, the three-legged elf who was the last one to make it snow. Rocko says he would love for it to snow, but the head elf says they lost Mitch in a blizzard.

Rocko decides to invite the elves to his Christmas party and they accept. Ed Bighead sees this and says that if there's anything he hates more than Christmas, it's elves. Bev says she'll be glad to meet them at Rocko's party. Ed says they didn't get an invitation, thinking it's because he never gets invited. Bev assures him that it probably got lost, but Ed refuses to take part in the festivities. Ed then encounters Filburt, who has just dropped off Rocko's tree. Ed convinces Filburt not to go to the party by claiming that the elves carry foot fungi; the mere mention of this frightens Filburt, who's afraid of germs, so much that it causes him to break out in a rash. At his home, Filburt spreads the rumor and soon nobody, including the elves (who think that trolls have been invited), want to go to the party.

That evening, Rocko is disappointed when no one shows up and is worried that the invitations were lost, and that there may not be any Christmas cheer this year. He calls his parents in Australia, but their line is busy. He hears the doorbell ring and sees it's the youngest elf whom he saved earlier. Rocko invites him in and tells him there won't be much cheer since nobody showed up. To get him in the spirit, the elf asks him to read The Night Before Christmas, which he does, and then falls asleep when he finishes. The elf goes outside and attempts to make it snow but to no avail. Then he remembers how Rocko saved him earlier, and the love in his heart finally gets the cloud to make it snow above Rocko's house.

The next morning, a crowd has gathered around Rocko's snow-covered residence. Mitch the elf returns and reunites with his family, telling his father that he went into seclusion because no one had any Christmas cheer, but the youngest elf had true Christmas cheer, and so did Rocko. The others hear this and apologize to Rocko for spreading rumors and missing out on his party; he accepts and invites them inside. Mitch points out that Ed Bighead isn't there, so he sends the youngest elf to his house. The elf shows Ed his lost invitation, which briefly warms the frog's heart until the elf then hits him in the shin with a hammer. Ed chases the elf but gets caught in the Christmas lights attached to Rocko's ceiling. The others see this and are glad he's found the Christmas spirit. Rocko then receives a call from his parents and tells them how much he misses them. Snow begins to fall all over O-Town as the episode ends.

The special was first released on VHS by Sony Wonder on August 29, 1995. This VHS release also contained The Ren & Stimpy Show short "Yak Shaving Day" as a bonus cartoon. The special was released on VHS again by Paramount Home Video in 1997, this time with another Rocko's Modern Life episode, "Snowballs", appearing in place of the Ren & Stimpy segment.

The special was made available on DVD on Shout! Factory's Rocko's Modern Life: Season 2 DVD set, released on February 7, 2012 (and later included as part of the Rocko's Modern Life: The Complete Series set a year later). It was also included (along with another episode from the show's first season, featuring the segments "Cabin Fever" and "Rinse and Spit") on Shout!'s Out of the Vault Christmas compilation DVD, formerly released as a Walmart exclusive on October 6, 2015.

Out of the Vault Christmas DVD
Shout! Factory
October 6, 2015 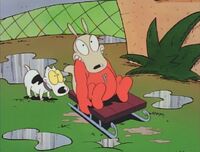 "I wish it would snow for Christmas this year, Spunky." 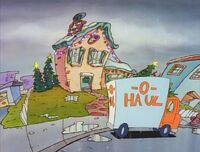 Rocko finds he has new neighbors with Christmas spirit. 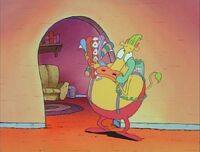 Rocko calls Heffer to invite him over for Christmas. 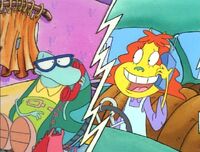 Rocko then calls Filburt, who invites Dr. Hutchison to come with him. 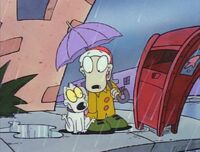 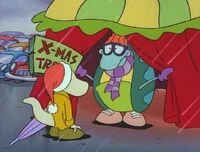 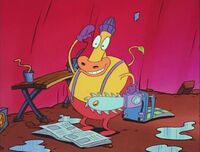 ...and Heffer are both working to sell Christmas trees. 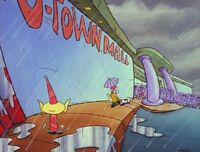 The little elf follows Rocko to the mall. 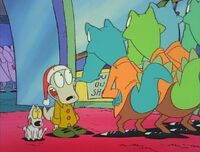 Rocko stands up to the shoe salesmen when they pick on the little elf. 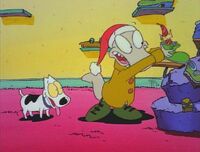 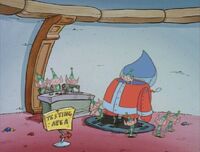 The elves testing their Santa robot. 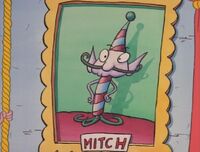 A portrait of Mitch, the lost three-legged elf. 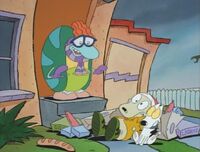 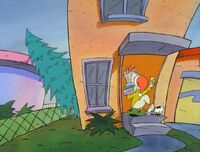 ...that his tree has been delivered. 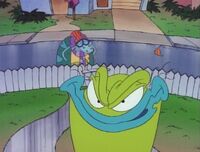 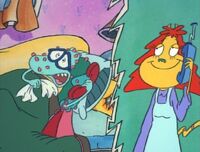 Filburt, having gotten a rash thanks to Ed's lies, tells Dr. Hutchison they can't go to Rocko's party. 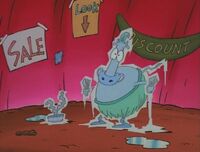 Meanwhile, Heffer is frozen from trying to sell Christmas trees. 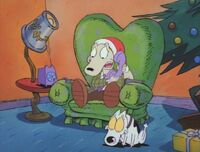 Rocko attempts to call his family. 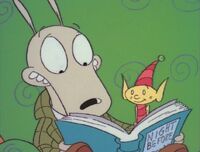 Rocko reading to the little elf. 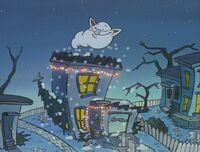 The cloud is finally able to produce snow. 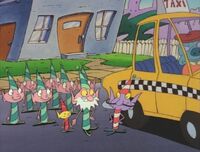 The elves reunite with Mitch. 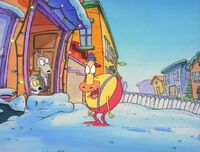 Heffer apologizes for getting so wrapped in selling trees that he missed the party. 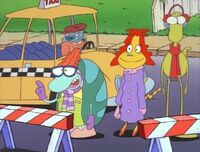 And Filburt apologizes for spreading rumors. 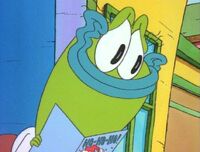 Ed learns that he was invited to Rocko's party after all. 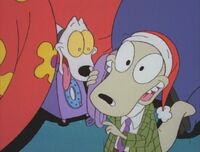 Rocko receives a phone call from his family. 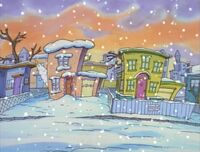 The closing shot of snow falling over O-Town.