Rudolph the Red–Nosed Reindeer is a long-running Christmas television special produced in stop-motion animation by Rankin/Bass, and the company's first Christmas special. It originally aired on NBC on December 6, 1964, and is now the world's longest-running and highest-rated television special of all time. It is based on the song of the same name by Johnny Marks, which in turn was based on the 1939 poem of the same title, written by Marks' brother-in-law, Robert L. May, who was an advertising copywriter for Montgomery Ward. Marks also wrote the music and lyrics for the songs in this special, and the background soundtrack includes two more songs he made famous: "I Heard the Bells on Christmas Day" and "Rockin' Around the Christmas Tree".

Sam the Snowman narrates the story of Rudolph, a reindeer who is born with a glowing red nose. His father, Santa's lead reindeer Donner, feels ashamed and uses a special cover to hide Rudolph's nose so he and his wife can send him to take-off practice a year later without him being ridiculed by the other yearlings. Meanwhile, an elf named Hermey has his own problem - he wishes to be a dentist instead of making toys. The elf foreman scolds him and tries to get him to obey, but he refuses to change his interests.

A year later, Rudolph is a yearling reindeer who is sent to take-off practice to learn how to fly, with Comet as his coach. Donner still tries to hide the nature of Rudolph's nose with the cover. This causes his voice to sound as if he had a permanent cold. Despite this, two deer befriend him. One is a little buck named Fireball and the other is a beautiful doe named Clarice. During some horseplay, Fireball inadvertently pops the cover off of Rudolph's nose. After seeing his glowing nose, the other reindeer, including Fireball, start ridiculing him, and Comet bans him from the reindeer games as a result. Clarice is the only one who still likes him and tries to comfort him. However, their musings are interrupted by her father, who forbids her from being around Rudolph. Feeling outcast, he runs away into the forest.

While in the woods, Rudolph meets up with Hermey. The two bond after they discover they each have something that makes them unique. After deciding to be "independent" together, they set out to seek "Fame and Fortune." After the song ends, The Abominable Snowmonster of the North, a carnivorous monster who hates Christmas and feeds on reindeer, chases them. They manage to escape him.

Later, they meet a prospector named Yukon Cornelius who is obsessed with finding silver and gold. The trio manages to flee to the Island of Misfit Toys, ruled by a winged lion named King Moonracer. Because they are misfits but not toys, he allows them to spend one night on his island. Rudolph leaves on his own, having realized that his nose is a danger to his friends.

A few months later, Rudolph grows into a handsome young buck. He decides to return home despite being ridiculed. When he arrives back in his cave, he finds out that his parents are not there. He learns from Santa that they left to go looking for him, and Clarice went with them. He searches the North Pole and finds them being held captive by the Abominable Snowmonster. He attempts to rescue them before Hermey and Yukon Cornelius find him and they try to help. They manage to knock out the Abominable while Hermey removes the monster's teeth, but Yukon knocks himself, his sled team, and the Abominable over a cliff when he stands up to him.

The others return home, where they tell what happened. Rudolph and Hermey stop being ridiculed, and the lead elf finally allows Hermey to open a dentist's office the week after Christmas. Yukon and the others, who survived, make a grand entrance with the Abominable, now reformed by Yukon. Everyone decides to keep him around because he can put a silver star on top of Christmas trees without a stepladder. However, a strong blizzard is too much for Santa's team to handle, so he decides to cancel the Christmas Eve flight. But Rudolph's nose inspires him, and he asks him to lead his sleigh, which he agrees to. He leads the sleigh to the Island of Misfit Toys and takes them along the flight, where they are dropped off to their respective homes. With Rudolph leading the sleigh, it turns out to be a merry Christmas after all.

A soundtrack album was released in 1964 on Decca Records. The album was available in mono (DL 4815) and stereo (DL 74815), and featured all of the songs from the special. Because General Electric was the sponsor from 1964 through 1966, this album was issued as a premium gift with a purchase of any GE item. The album was later reissued in 1973 on MCA 15003; it remains in print on CD to this day.

The special was broadcast on NBC from its premiere in 1964 until 1971. CBS acquired the rights to air this special the following year.

Rankin-Bass sold many of the pre-1973 specials and series (including The Little Drummer Boy and Santa Claus is Comin' To Town) to Broadway Video, headed by Lorne Michaels of Saturday Night Live fame. The collection was then sold several years later to Golden Books Family Entertainment, and later spun off into Classic Media, part of the Entertainment Rights group in the United Kingdom until 2009, when the company was bought by Classic Media's successor, Boomerang Media. In July 2012, Dreamworks Animation SKG purchased Classic Media, and currently holds those rights under the DreamWorks Classics banner. 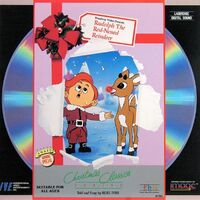 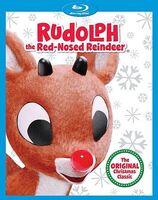 Blu-ray
Vivendi Entertainment, 2010
Add a photo to this gallery

Retrieved from "https://christmas-specials.fandom.com/wiki/Rudolph_the_Red-Nosed_Reindeer_(Rankin/Bass)?oldid=45978"
Community content is available under CC-BY-SA unless otherwise noted.