Holidaze: The Christmas That Almost Didn't Happen
Rusty Reindeer is the protagonist of Holidaze: The Christmas That Almost Didn't Happen. He is the son of Roger and the younger brother of Rudolph. Unlike his famous brother, Rusty is not a good flyer and whilst his brother's nose glows red, Rusty's can produce a slight electrical flicker. Rusty's job at The North Pole is to act as a stand in for Rudolph.

Rusty is also seen as an outcast by the other reindeer and his father favors and gives most of his attention to Rudolph, much to Rusty's dismay. Rusty wishes to find his place in Christmas, not just being known as Rudolph's little brother and to make his father proud of him.

One day, Rusty (on the advice of an elf) goes to The Big City and goes to a support group for holiday icons called Icons Anonymous (which consists of Candie the Easter Bunny, Albert the Thanksgiving Turkey, Mr. C the cherub and Trick and Treat the Halloween Ghosts).

Whilst playing a camel in a nativity play, Rusty meets a young boy (known simply as The Kid) who doesn't believe in Santa Claus and believes that parents buy the presents. Rusty tells him that while parents do buy some of the presents, there is one special present that only Santa can give and that the Naughty-Nico-O-Matic (that resembles a laptop) is used to make the naughty and nice list.

After the Kid discovers that the Naughty-Nice-O-Matic does exist, he Evans his believe in Santa, but learns that he must reveal this to one of Santa's helpers by the stroke of midnight on Christmas Eve. Rusty decides that an actor dressed as Santa, whom he met earlier might be a helper, so agrees to meet with the Kid at Walmart. Whilst looking for the actor, Rusty runs into Albert (who had been sent by the other icons to look for him) and they find the actor at a diner. The actor tells Rusty that if he learned to be a good actor like him, he might exhibit twice the appeal his brother has. He also gives Rusty a piece of advice; Don't see yourself in the art. See the art in yourself.

Rusty along with Albert, later goes to Walmart and tells the Kid that the only way to get his present (a catcher's mask) now would be to go to the North Pole and declare his belief in person. The two use a laptop on sale to contact the elves, who tell them that the Naughty-Nice-O-Matic's new interfaces are confusing and they have only six hours to give the Naughty-Nice list to Santa or else Christmas will be cancelled. A shocked Rusty declares that they have to get to the North Pole immediately. Luckily, he and the Kid are able to get there via a "super hyper ultra mega rush delivery".

They arrive at Santa's Workshop, where Santa still hasn't got the list. The Kid is able to fix the laptop. The Kid turns down the catcher's mask and asks for Rusty to lead Santa's sleigh, but Rusty tells him that he can't fly, but has a better idea. It is then shown that Rusty has became a Sleigh Traffic Controller to help Santa and the Sleigh Team get through bad weather.

Rusty with Albert and the Kid 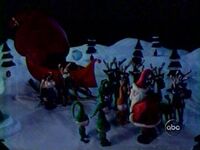 Rusty with the Kid, Santa, elves and the Sleigh Team

Rusty finding his place as a Sleigh Traffic Controller
Add a photo to this gallery
Retrieved from "https://christmas-specials.fandom.com/wiki/Rusty_Reindeer?oldid=188714"
Community content is available under CC-BY-SA unless otherwise noted.