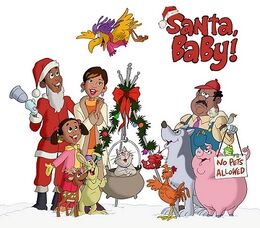 This article is about the 2001 Rankin/Bass special. For the 2006 ABC Family Original Movie, see Santa Baby.

Santa, Baby! is a 2001 animated holiday special that aired on the Fox network. It was Rankin/Bass' first new original Christmas special in over sixteen years (their previous holiday production was the 1985 adaptation of The Life and Adventures of Santa Claus), and the only one produced after the liquidation of their animation department. The Special featured the voices of Eartha Kitt and Gregory Hines. Like much of Rankin/Bass' specials, it was based off a song, in this case, the 1954 song originally recorded by Kitt and covered in A Very Special Christmas by Madonna in 1986.

When a little girl uses her wish from a Christmas partridge to help her dad over his song-writing slump, he finds his inspiration and even gives the real Santa Claus a helping hand!

Retrieved from "https://christmas-specials.fandom.com/wiki/Santa,_Baby!?oldid=134659"
Community content is available under CC-BY-SA unless otherwise noted.