Santa Claus (promotionally titled Santa Claus: The Movie) is a 1985 Christmas film starring Dudley Moore and John Lithgow. Released in theaters by TriStar Pictures on November 29, 1985, it was produced by Alexander and Ilya Salkind (who had also produced the Superman film series). The rights for the film are currently held by StudioCanal.

Sometime in the 14th century, Claus is a peasant woodcutter in his mid-50s who, with his wife Anya, delivers his gifts to the children of a certain village. One night, Claus, Anya and their reindeer, Donner and Blitzen, are rescued from certain death in a blizzard, only to be transported to the vast "ice mountains, way up at the top of the world." Their arrival is heralded with the appearance of several elves, or--as Claus's people call them in their legends--the Vendequm, led by the venerable and wise elf named Dooley.

The Clauses also meet Patch, an inventive elf who has designs for such future items like plumbing and an alarm clock, and Puffy. Introduced to the mass workshop where the elves construct endless amounts of toys for the world's children, Claus learns that it is his destiny to distribute those toys on Christmas Eve. After months of preparation, that day arrives and Claus is granted the name "Santa Claus" by the Ancient One, the eldest of the elves, who said that the prophecy of a human man would come who was "an artisan, craftsman, and skilled toymaker, who loved all children but had no children of his own". Santa's yearly routine of delivering his gifts begins when he uses his modified sleigh and six additional reindeer to accompany Donner and Blitzen. Claus, still in disbelief about his new job and the fact he and Anya are now immortal, wonders how it is possible to deliver around Earth in one night, to which the Ancient One reassures Claus that "when you travel, time travels with you". When all eight deer are joined together, they can fly by eating an otherworldly reindeer feed.

Two separate musical montages follow, each depicting Santa delivering toys across the centuries, and demonstrating how a great deal of the mythos around him is established. One part shows a girl writing to Santa Claus telling of her unruly little brother who ought not receive a present, and another shows Dooley reciting The Night Before Christmas, offending Santa when it is suggested about his girth, but Dooley says it was just a poem not intended to offend. Yet another scene shows the elves tailoring Santa's well known suit, to which Anya disagrees with the proposed green color. Puffy suggests brown, but when Patch suggests red, Anya thinks that is perfect.

Eventually, the film moves to the late 20th century. Santa is becoming increasingly tired by the workload of toys he must deliver, combined with the planet's ever-growing population. At that point, Anya suggests that Santa should have an assistant. Patch and Puffy are selected as candidates, and both their ideas are compared in a competition, whereas Patch will lead one elf team who will oversee a high-tech operation and Puffy will lead the other team who still uses the old-fashioned toy-making methods, such as elves painting with their beards. A third musical montage takes us through the competition, which Patch ultimately wins through his invention of an automated manufacturing machine. Patch ignores a fellow elf's warning that his machine is overcharged, which proves to be true as some toys come out unfastened.

Several nights later, on Christmas Eve, Santa flies to Manhattan and admires the skyline, wishing the Statue of Liberty a Merry Christmas. However, Christmas is anything but merry for an homeless orphan named Joe, who is jaded from seeing drunks in Santa costumes stealing from charity buckets, and is also lonely and hungry from seeing families eat together. Santa is shocked at seeing a child having to fend for himself and ultimately wins Joe over when he uses his magic to transport in and out of houses. Santa then takes Joe along for his flight. During the flight, Santa tempts the reindeer into performing an aerial stunt dubbed the "Super Duper Looper" in which the reindeer attempt to perform a 360° degree circle in midair, but, as often happens each year, the maneuver fails when Donner's aerial dizziness gets the better of him. Santa and Joe unintentionally awaken a 9-year-old girl named Cornelia, who had secretly spent some days befriending Joe. Santa leaves Joe at Cornelia's place, promising he will always keep in touch with them.

Shortly after Christmas, some of Patch's toys break. Santa is dismayed, as he has never had toys returned. Surrendering his post as assistant to Puffy, the reluctant Patch leaves the North Pole. Joe get attacked by street kids for believing in Santa, and the girls in Cornelia's ballet class make fun of her for believing her gifts actually came from Santa.

Patch goes to New York City where he meets B.Z., Cornelia's step-uncle (their specific relationship is never explained)--a greedy, scheming toymaking executive on the verge of losing his company after being subject to a Congressional investigation due to his shoddy products and that his employees have quit due to not getting paid. Patch offers to help him make toys, as he sees B.Z's toys getting recalled at toy stores and mistakenly thinks they are selling like hotcakes. Patch uses the ingredient from the reindeer feed to create a puce-colored lollipop that can make people float in midair. B.Z. has the "Patchmobile" built for Patch, which is fueled on reindeer feed and looks like a dozen toys put together, and Patch distributes lollipops the following Christmas, upstaging Santa. Although Patch wants to give away the lollipops in order to prove himself to Santa, B.Z. plans to let Patch give away the first batch for free, and then start selling them and make tremendous amounts of money. Patch's lollipops gain huge acclaim, relegating Santa to second place with the publicity the world over.

Patch thinks his job with B.Z. is done and says that he wishes to return home, but B.Z. urges him to stay on by inventing candy canes with much more potent amounts of reindeer dust that will make people fly. Although Patch agrees to convert his production from lollipops to candy canes, he is ill at ease with B.Z.'s idea of making March 25th "Christmas II".

Dr. Eric Towzer, B.Z.'s man for research and development and the one whom Patch reports progress, tells B.Z. that a batch of candy canes exploded when he tested them on extreme heat. On discovering this news, B.Z. resolves to keep this information a secret and schemes to move to a South American country with no extradition treaty to avoid criminal prosecution. B.Z.'s bodyguard Grizzard captures and imprisons Joe when he finds him eavesdropping on him and Towzer. Unknown to either Towzer or B.Z., Cornelia also overheard the plan.

Patch later finds and frees a bound and gagged Joe and decides to return to the North Pole with him, when he sees a carved toy resembling himself, an "elf-portrait", given to Joe by Santa. The two friends buckle themselves into the Patchmobile, which they have stuffed with loads and loads of the candy canes. The NYPD go to arrest B.Z. after Cornelia alerts them of his crimes, having already apprehended Grizzard and Towzer. B.Z. escapes the police by eating some candy canes and flies out of his office, but he keeps floating to increasing altitudes.

Having summoned him with an incomplete letter, Cornelia and Santa now pursue Patch and Joe, as they already see the candy canes sparking, as Patch does not know of their volatile nature near heat. Their only hope of saving them now is to attempt the aforementioned "Super Duper Looper", which will be even tougher since Santa is down to six reindeer (two of them came down with the flu). Santa convinces Donner to overcome his fears for Joe's sake, and the reindeer do the Super Duper Looper just in time as the Patchmobile explodes, but Patch and Joe fall into the back seat of Santa's sleigh.

As Patch reconciles with his fellow elves, Joe is welcomed into the Clauses' family and Cornelia is invited to stay for a year (to which Dooley remarks, "As if I don't have enough to do! Now I'm going to have to be a schoolteacher!"). The film ends on the Patchmobile remnants and B.Z. floating away into the mesosphere, shouting for help. 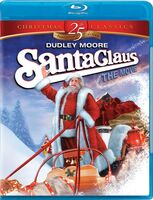 Retrieved from "https://christmas-specials.fandom.com/wiki/Santa_Claus_(1985)?oldid=153475"
Community content is available under CC-BY-SA unless otherwise noted.