Christmas Specials Wiki
Register
Don't have an account?
Sign In
Advertisement
in: Specials, Rankin/Bass, Originally aired on ABC,
and 10 more

Santa Claus is Comin' to Town

This article is about the 1970 Rankin/Bass television special. For the song the special is named after, see Santa Claus is Coming to Town (song).

Santa Claus is Comin' to Town is an hour-length stop-motion Christmas television special produced by Rankin/Bass, originally aired on ABC on December 14, 1970. It stars Fred Astaire as S. D. Kluger, the narrator, and Mickey Rooney as the title character. The film tells the story of how Santa Claus, and several other well-known Christmas traditions, came to be. It is based on the Christmas song of the same name, which was introduced by Eddie Cantor in 1934.

Following a newsreel stating how children around the world are preparing for the arrival of Santa Claus, we are introduced to the narrator, Special Delivery "S.D." Kluger. When his mail truck breaks down, he decides to tell the story of Santa in response to several letters sent from children.

The story begins in a gloomy municipality called Sombertown, which is ruled by the grouchy, child-hating Burgermeister Meisterburger. One night, a baby arrives on his doorstep with a name tag reading "Claus" and a note requesting that the Burgermeister raise the child as his own. The Burgermeister angrily orders his right-hand man, Grimsley, to take the baby to the local orphanage. On the way over, however, a gust of wind blows the baby far away to the Mountains of the Whispering Winds. There, a group of animals hide him from the Winter Warlock, a powerful wizard who dislikes anyone trespassing on his land.

The animals then bring the baby to the other side of the mountain, where he is found by a family of elves by the name of Kringle. Their queen, Tanta Kringle, decides to adopt the baby and name him "Kris." As he grows up, the elves teach Kris how to make toys, having been "the first toymakers to the king" long ago. When Kris is old enough, he volunteers to deliver the toys to Sombertown, joined by a lost penguin whom he names Topper. Meanwhile, the Burgermeister, after tripping on a duck and breaking his funny bone, outlaws all toys in Sombertown, declaring that anyone with a toy in their possession will be arrested and thrown in the dungeon.

After avoiding an encounter with the Winter Warlock, Kris arrives in Sombertown, where he starts handing out toys to the children. He is briefly halted by Miss Jessica, the local schoolteacher, but she quickly warms up to him when he gives her a China doll as a "peace offering." Afterwards, the Burgermeister arrives and nearly arrests the children for playing with the toys. Kris gives the Burgermeister with a yo-yo, which he initially enjoys (admitting he loved playing with yo-yos when he was a kid), only for Grimsley to remind him that he is breaking his own law. Enraged, the Burgermeister orders to have Kris arrested, but Kris just barely manages to escape the Burgermeister's troops and out of Sombertown.

As Kris and Topper pass through the forest, they are captured by the Winter Warlock's tree monsters and the Warlock confronts them. Kris gives the Warlock a toy train in an attempt to placate him; touched by this act of kindness, the Warlock's icy exterior melts away and he befriends Kris. To repay him, the Warlock (now preferring to be called just "Winter") tells Kris that Jessica is looking for him. Kris finds Jessica, who informs him that the Burgermeister destroyed all of the toys he delivered and the children want new ones. The Kringles move onto Winter's mountain and build a new workshop there, and Kris starts delivering the toys at night.

To prevent further toy deliveries, the Burgermeister orders all doors to be locked tight, so Kris starts sliding down chimneys to deliver them. The Burgermeister then begins searching houses outright, so Kris resolves to hide the toys in the children's stockings, which they routinely leave hanging by the fireplace. Frustrated with his inability to stop Kris, the Burgermeister sets a trap for him when he makes another delivery. He sends Grimsley to arrest Winter and the Kringles, while he personally captures Kris, who surrenders willingly once he sees Topper being taken hostage outside. With the Kringles and most of their allies now in the dungeon, the Burgermeister personally sets fire to the children's toys in front of them, declaring they will never play with toys again.

Jessica implores the Burgermeister to release Kris and the Kringle family, but her pleas fall on deaf ears. That night, she visits the dungeon and tells Winter to use his magic to free everyone, but the old warlock laments that he has no more magic except for some corn that can make reindeer fly. This inspires Jessica to give some of the corn to Kris's reindeer friends - Dasher, Dancer, Prancer, Vixen, Comet, Cupid, Donner, and Blitzen - who then use their new flying ability to help the Kringles, Kris, Topper, and Winter escape. The enraged Burgermeister vows that he and his family will hunt them down eventually.

After some time, it is shown that Kris has grown a beard, and Tanta suggests that he return to his birth name "Claus" for safety. Kris asks Jessica to share the name Claus with him, as his wife. After they are married, the group travels to the North Pole, where they build a new workshop, making more toys for the children in Sombertown. Eventually, the people of Sombertown realize how silly the Meisterburgers' laws are once the Burgermeister passes away and falls out of power, and Kris' legend goes worldwide. Now known as Santa Claus, he realizes that he cannot keep up with all the toy requests, leading to his decision to go out just once a year, on December 24th.

The film ends as S.D. Kluger reflects on what Christmas is truly about, even though there are still a few misguided folks who do not understand. Having by now fixed his mail truck, S.D. remembers that he still has to deliver the letters to Santa. Joined by Topper, Winter, the Kringle Brothers, and a parade of children, S.D. drives to Santa's castle while singing "Santa Claus Is Coming to Town" as the credits roll. The film closes with Santa stepping out of his castle, revealing himself in full splendor.

The special contains the following songs:

All of the songs were included on the special's soundtrack, Santa Claus is Coming to Town and Frosty the Snowman. "The First Toymakers to the King", "No More Toymakers to the King", "Put One Foot in Front of the Other", and the title song were all included on the 1996 album Rudolph, Frosty and Friends' Favorite Christmas Songs. The latter two songs were also featured on the album Nick at Nite: A Classic Cartoon Christmas, while the former two appeared on that album's sequel, A Classic Cartoon Christmas, Too. "Put One Foot in Front of the Other" was later featured on Songs to Celebrate 25 Days of Christmas.

As of 2021, the special still airs annually on ABC. ABC's sister cable channel, Freeform, has also aired the special as part of their annual 25 Days of Christmas programming block at least once a year since the block's inception in 1996. 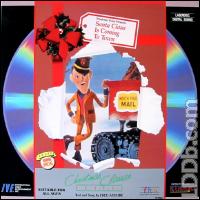 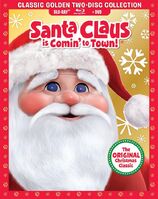 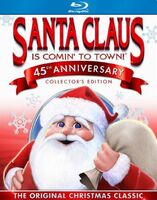 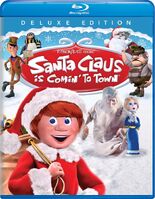 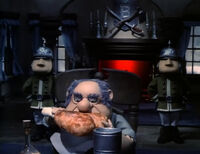 Burgermeister Meisterburger, the villain of the special. 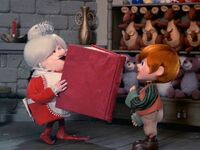 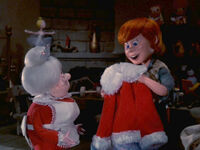 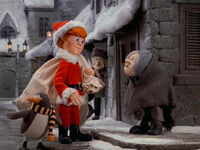 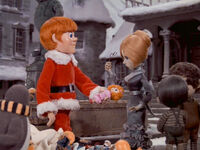 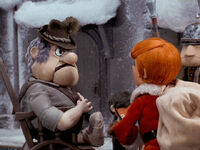 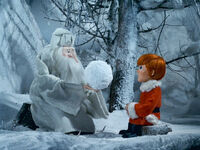 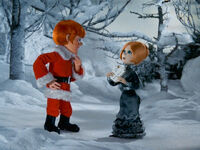 Jessica brings Kris the letters the children wrote for him. 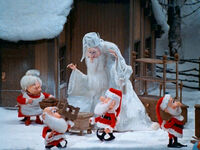 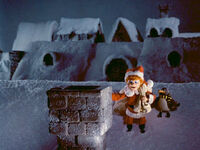 Kris gets the idea to start going down chimneys. 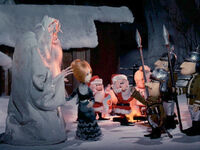 Grimsley arrests the Kringles and Winter... 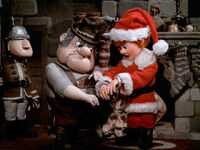 ...while the Burgermeister springs a trap on Kris. 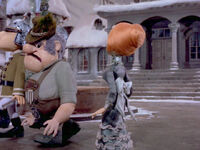 The Burgermeister fires Jessica after she begs him to release Kris. 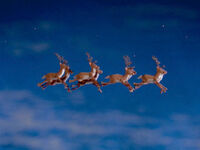 After gaining the ability to fly, Kris' reindeer friends... 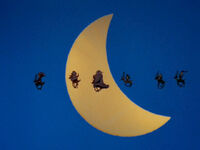 ...rescue him and the others. 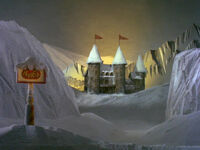 Kris builds his workshop castle at the North Pole. 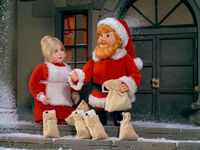 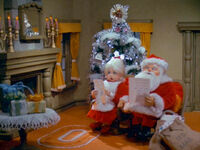