Santa Paws 2: The Santa Pups is a direct-to-video Christmas movie, directed by Robert Vince and produced by Anna McRoberts. It was released on DVD, Blu-ray, and iTunes by Walt Disney Studios Home Entertainment on November 20, 2012. It is a sequel to the 2010 direct-to-video film The Search for Santa Paws.

When Mrs. Claus travels to Pineville, the playful Santa Pups stow away on her sled. Taking mischief to a whole new level, they begin granting joyful wishes to Pineville's boys and girls, but something goes terribly wrong - the Christmas spirit begins to disappear. Now the Santa Pups and Mrs. Claus must race to save Christmas around the world. 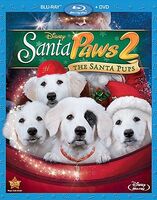