Christmas Specials Wiki
Register
Don't have an account?
Sign In
Advertisement
in: Articles that need a longer synopsis, Specials, Direct-to-video specials,
and 5 more

Scooby-Doo! Haunted Holidays is a Christmas special produced by Warner Bros. Animation, based upon the Scooby-Doo franchise created by Hanna-Barbera Productions. It was originally released as a direct-to-video special on the Scooby-Doo - 13 Spooky Tales: Holiday Chills and Thrills DVD set (which also included the franchise's previous two Christmas specials, "The Nutcracker Scoob" and A Scooby-Doo Christmas) on October 16, 2012, and made its television premiere on the Cartoon Network on December 4th of the same year.[1]

Scooby-Doo and the Mystery gang participate in a holiday parade where they discover an abandoned haunted clock tower with a troubled past. The sinister snowman haunts the streets and accompanied with a large blizzard, threatens to close down the toy store for good. 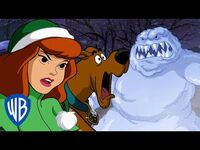 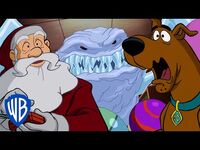