Scooby-Doo
"Twas the Night" (cameo)
Scoobert "Scooby" Doo is the title character of the animated television series Scooby-Doo, created by Hanna-Barbera. Scooby-Doo is the pet and life long companion of Shaggy Rogers and in many iterations, including the original series, is regarded as a unique Great Dane dog who is able to speak in broken English, unlike most other dogs in his reality, and usually puts the letter R in front of words spoken. In 2002, he was ranked #22 in TV Guide's Top 50 Greatest Cartoon Characters. 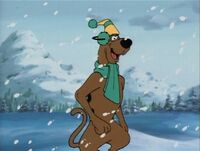 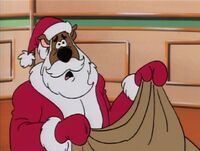 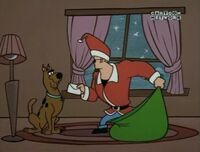 Scooby's cameo in "Twas the Night".