Scrooge is a musical version of Charles Dickens' classic tale A Christmas Carol. Produced by Cinema Center Films (the original feature film division of CBS) and distributed by National General Pictures on November 5, 1970, the film tells the familiar story of miser Ebenezer Scrooge and his change of heart after the three spirits visit him on Christmas Eve. Leslie Bricusse wrote the original music and songs. Albert Finney won a Golden Globe for Best Motion Picture Actor in a Musical/Comedy for his portrayal of Scrooge in 1971.

According to Rotten Tomatoes, the movie was designed as a spiritual follow up of an earlier musical adaptation of a Dickens novel, the multi-Academy Award winning Oliver! (based on a West End Stage show which in turn was adapted from Oliver Twist) from 1968, which itself is often shown around Christmas time.

The film is unique in that unlike most other adaptations, Jacob Marley is seen after his well-known warning. During Scrooge's future where he sees Tiny Tim's grave, he unknowingly falls to the center of the earth, via his own empty grave, where he is reunited with Marley in Hell. True to Marley's prediction, muscular slaves of Satan shackle Scrooge in chains akin to Marley's. Marley then tells Scrooge that Hell for him will be akin to his work, as his counting house is waiting for him, and that he should feel honored as most men who go to Hell are usually very stupid or slaves to their passions, not methodical and calculating in their sinning as was Scrooge. Marley tells Scrooge he will be rewarded for combining intellect and discipline with sin by being given a job no one else in Hell was qualified to do, as "Lucifer's personal clerk". In other words Scrooge would be to Lucifer what Bob Cratchit was to Scrooge. This doom was sufficient enough to shock Scrooge awake.

Five children sing before doors in 19th century London. Scrooge sends them away without any money.

His nephew Fred enters his countinghouse, and suggests that 7PM on Christmas Eve is too late to be working. Mr. Cratchit mumbles, "Hear, hear!" but Scrooge threatens him with the loss of his job. Fred invites him to dinner the following evening, but Scrooge refuses and Fred leaves.

As the clock strikes seven, Cratchit leaves his desk and asks for his wages. Scrooge gives them with an ill grace and also reluctantly allows Cratchit to have the following day, Christmas, off.

The scene switches to a toy shop window where Tiny Tim is watching the mechanical toys. Bob meets them there and, flush with his 15 shillings of wages, they buy preparations for their Christmas meal. Meanwhile, Scrooge meets two gentlemen as he locks his counting house. They ask him for a contribution to feed the poor, but Scrooge refuses. On his way home, he stops by several merchants to demand overdue loan payments, also accepting samples of their merchandise as no more than his due. The children follow him home, taunting him by calling him "Father Christmas." and steal his top hat.

As he reaches home, the door knocker turns momentarily to the face of his old partner, Jacob Marley. Disbelieving, Scrooge enters his rooms, where he sees a ghostly carriage go past. He sits down by the fire to eat his supper, when all the bells in the house start to ring. They rise to a deafening crescendo, then stop abruptly. Scrooge hears a clank of chains coming up the stairs, and locks his door, but the locks unbolt themselves and the ghost of Jacob Marley enters. Scrooge asks him to sit down, and the ghost does so, although missing the chair. Scrooge tells the ghost he does not believe in him, whereupon the ghost rises in the air, moaning and banging his chains. Scrooge, terrified, admits belief. The ghost explains he wears the chains he forged in life, and that Scrooge has forged one equally as long. The ghost takes him out into the sky, where dozens of phantoms float, and warns him that he may share their fate. The ghost explains that the visit of three ghosts may allow Scrooge to avoid this.

When the clock strikes one, the first ghost appears. She takes Scrooge back to his boyhood school, where most of the children are off for a Christmas party. Young Scrooge, however, is left behind. At another Christmas, however, Scrooge's sister Fran comes to take him home, and at a third Scrooge's old master Fezziwig prepares a party with the help of the apprentices. Scrooge doesn't join the dancing, however, as he doesn't know how. But Old Scrooge points out that the money Fezziwig had spent was minimal compared to the happiness that he had brought. He had planned to wed Fezziwig's daughter, and a series of flashbacks occur showing them enjoying time together. The ghost asks why he let her go if he loved her, and they view a final Christmas where she leaves him.

Back in his bedroom, Scrooge is ready to pass the whole thing off as a dream, when he hears laughter from the next room. A tall, bearded figure is there with light and a large feast. He offers Scrooge a drink of "The Milk of Human Kindness", which he enjoys greatly. The ghost shows Scrooge how to enjoy life, and takes him on a journey to see Bob Cratchit's house. Cratchett proposes a toast to Scrooge, which his wife at first refuses to make, thinking him stingy, but eventually she relents due to the day.

When Scrooge asks if Tiny Tim will die, the ghost repeats his words back to him: "Best that he do it and decrease the surplus population". They then go to Scrooge's nephew Fred's house, where he is hosting a party. Fred proposes a toast to Scrooge, and says he doesn't think Scrooge is all bad. Scrooge watches the dances and games and wants to get involved, although the ghost gets quite sleepy. Afterwards, Scrooge, nostalgic, wanders back to his house.

He wakes in his cold, dark, rooms, and is confronted by The Ghost of Christmas Yet to Come. They find a crowd of people outside Scrooge's countinghouse, where everyone is very excited and joyful, much to Scrooge's delight. Happily, he gets up to give a speech, not realizing that his own coffin is being taken out of his house behind him. The coffin is taken down the street with a debtor dancing on it, Scrooge never realizing the true cause of the crowd's joy. Before he finds out, the ghost transports him to Bob Cratchit's house, where the family is working on a grave blanket for Tiny Tim. Scrooge asks to be taken to Tim and the ghost obliges by transporting him to a graveyard where Bob lays a flower on Tim's grave.

The ghost points Scrooge to his own grave. He falls in, and down a tunnel into a Netherworld. Marley meets him there to show him to his quarters. Marley confirms that Scrooge is dead, and leads him to an icy cold office, with rats. Several devils bring Scrooge's enormous new chain to him, and wrap it around him. As Scrooge shouts for help, Marley leaves, and once again Scrooge awakens in his bedroom.

Thrilled to find himself alive, Scrooge rushes out into the street in his nightshirt, and tells a passing boy to order a huge turkey from the butcher. He then proceeds to the toy store where he purchases almost everything in the store. He takes several presents to his nephew, before dressing as Father Christmas and giving out many toys to the street urchins. Next he goes to Bob Cratchit's to distribute presents, including a large mechanical carousel for Tiny Tim. He then tears up his entire debt ledger and gives 100 guineas to the charity workers. In the end he fastens a beard and Santa hat to the door knocker, telling it that he has to go have Christmas dinner with his family.

Music and Lyrics by Leslie Bricusse 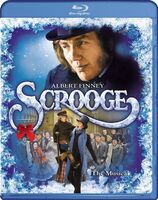 Retrieved from "https://christmas-specials.fandom.com/wiki/Scrooge_(1970)?oldid=159227"
Community content is available under CC-BY-SA unless otherwise noted.