"Snow Business" is the first Christmas-themed episode of Fireman Sam, produced for S4C and aired in its second season.

All Christmas preparations stop when the crew are called out to rescue Sarah and James who are trapped on ice. Fireman Cridlington is in the kitchen preparing the turkey for Christmas. Fireman Trevor Evans' bus gets stuck in the snow and Fireman Sam comes to the rescue.

The narrator and all of the characters are voiced by John Alderton.

The special has only made appearances on home video in the United Kingdom. It was first included on the Fireman Sam: Volume 4 – Snow Business VHS, released by BBC Video on October 1, 1989 in the United Kingdom. It also made appearances on several other VHS tapes: "Norman's Tricky Day", released on September 5, 1994; and on a bundle of Volumes 3 & 4 called Fireman Sam: 2 on 1 – Tales from Pontypandy, released on April 14, 1998. Its only DVD release is on the "Snow Business!" DVD, released by HIT Entertainment on November 13, 2006. 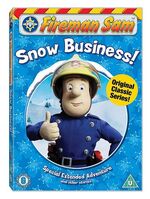 Retrieved from "https://christmas-specials.fandom.com/wiki/Snow_Business?oldid=168082"
Community content is available under CC-BY-SA unless otherwise noted.