My Little Pony
Spike is a baby dragon who is a recurring character from the My Little Pony, and the deuteragonist in the fourth-generation TV series My Little Pony: Friendship is Magic. He is Twilight Sparkle's assistant and roommate. He is extremely loyal and efficient, but also a tad obnoxious. He has the ability to magically deliver messages to Princess Celestia with his fire breath and also has a crush on Rarity. In the eighth season, he gains wings after going through a "molt", a developmental stage which is usual for dragons.

Spike is occasionally sarcastic and sometimes laughs at others' misfortunes, even though he usually means well. He is often defensive about his masculinity and dismissive of things he considers "girly," although his outward disdain is often a front. Though being young and often stated to only be a baby dragon, he occasionally has moments of great heroism and bravery. There are many moments in the series and the Equestria Girls films that Spike does really care for Twilight, and is supportive of her whenever she needs it. 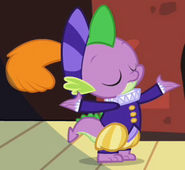 Spike as the narrator in "Hearth's Warming Eve".

Spike in "Best Gift Ever".
Add a photo to this gallery

Retrieved from "https://christmas-specials.fandom.com/wiki/Spike_(My_Little_Pony)?oldid=135945"
Community content is available under CC-BY-SA unless otherwise noted.