The Bear is a 1998 short animated television film directed by Hilary Audus. Based on the book of the same name by the author Raymond Briggs, the film first broadcast on Channel 4 in the United Kingdom during Christmas 1998. It was originally released in America on VHS by Buena Vista Home Video in 1998, shortly before its premiere on British television.

Like The Snowman, the film does not have any spoken dialogue, although for the American version, Judi Dench narrates the film. The musical score was by Howard Blake and the end theme "Somewhere A Star Shines For Everyone" was sung by Charlotte Church.

A young Polar Bear cub chases a bird and is captured by sea men on a ship after he is spotted. The bear, now grown up in captivity, looks up at a star before lying down to sleep. The next day, a red haired girl named Tilly is on a daytrip to London Zoo but accidentally drops her teddy bear into the bear pen. The bear wakes up and spots the teddy, paws at the bear and carries it off to his cave as Tilly looks on shocked.

Later that night, Tilly cries over her lost bear and her mother attempts to give her a toy rabbit for her to use as a sleeping comfort. Tilly takes the rabbit but then throws it on the floor and turns to sleep. Later that night, a figure is seen walking towards Tilly's window — it is the polar bear from the zoo with her lost teddy bear, who lifts her window and enters her room. The bear wakes Tilly up and returns her bear to her. Tilly looks up surprised to see the polar bear looking at her and smiling. Tilly then yawns and falls asleep again. The bear then sleeps in Tilly's bed.

The following morning, Tilly wakes up and runs downstairs to get some food for the bear. When she runs up the stairs, she finds that the bear has excreted on the stairs. Tilly cleans up the waste and empties it outside before walking into the bathroom and nearly slipping over the bear's urine. Cross, she then mops up the urine and watches on as the bear drinks out of the toilet. Tilly then moves the bear and runs a bath to wash him. He soaks Tilly in the process of getting into it and already beginning to tire of him, she washes the bear. In the kitchen, Tilly dries and brushes the bear and proceeds to feed him with honey. While eating the honey, the bear makes a mess of the kitchen and gets his nose stuck in the jar (to Tilly's amusement). Tilly and the bear then go to her parent's bedroom and sleep. Tilly wakes up to the sound of the door of her parents returning from work. She hugs her mother and they later sit down to watch The Snowman as the bear walks in and heads out. That night, the bear hides under Tilly's bed as she is put to bed by her mother. Tilly falls asleep and moves over as the bear climbs onto the bed with her.

A gush of wind knocks a snowglobe from Tilly's bedside table, attracting the bear's attention who looks at it, seeing the mother bear and cub looking back at him. Tilly follows the bear outside where he looks at the sky. The pair move to a wide open park area where they meet the Star Bear, which is a bear shaped constellation (like The Great Bear) and the trio embark on a tour around London, showing a wide variety of notable landmarks such as Nelson's Column, and bringing a display of Christmas angels to life with a Father Christmas display also coming to life. The trio then skate on the frozen River Thames (to the refrains of "Somewhere A Star Shines For Everyone") and travel further to the London Docks where a ship cuts through the ice where Tilly is left stranded but is saved by the bear before the moving ship passes.

The Star Bear looks up to what maybe the North Star and the bear looks at Tilly. They tearfully say goodbye and the bear returns to its own family. The Star Bear returns home with Tilly, who has been given a shining star (the size of a small stone). The Tower of London is seen and the bear pen in London Zoo as Tilly looks on in amazement. The polar bear returns to his natural habitat to find his family waiting for him. As the Sun rises the next morning, Tilly wakes up looking for her bear and to find that the windows open and the Star Bear's constellation is fading. As it does, the shining star vanishes from Tilly's hand, and she wonders about the bear from her window. 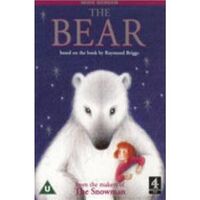 Retrieved from "https://christmas-specials.fandom.com/wiki/The_Bear?oldid=164167"
Community content is available under CC-BY-SA unless otherwise noted.