The Christmas Letter is a special Christmas episode of Mr. Men and Little Miss. Based on the Mr. Men books by Roger Hargreaves.

Jack was posting his letter to Mr. Stamp but gave it to Mr Forgetful, Mr Forgetful skipped Mr. Stamp and gave it to Mr. Snow who went to give it to Father Christmas. Jack was sad that his letter didn't get through so Mr. Happy cheered him up. Mr. Happy took Jack to Mr. Daydream and Mr Daydream lent them his giant bird so Jack could tell Father Christmas what he wanted for Christmas then they had breakfast with Mr. Silly in Nonsenseland where the snow is yellow. Mr. Mischief threw snowballs at Mr. Greedy and Mr. Nosey, Mr. Tall managed to duck but the last snowball hit Jack and Jack fell off the bird and arrived at Mr. Mean's house but Mr Mean charged him £18.59 for directions to Father Christmas. While Jack stayed at Mr. Mean's he met Little Miss Tiny who had been trapped and had to work for Mr. Mean for 6 long months. Late That Night, Jack and Miss Tiny escaped. Then they met king Mr. Funny who took for a ride in his shoe car. Soon Jack and Miss Tiny met up with Mr Happy and the bird then the three managed to reach Father Christmas's workshop. But Santa was having a bath so later Jack told him the list then Mr. Snow reminded him of all the other things on the list. Father Christmas gave Mr Happy, Jack and Miss Tiny a ride then next morning Jack woke up and found it wasn't a dream. then all the Mr Men wished Jack a merry Christmas. And Santa gave Jack his special watch that he admired. 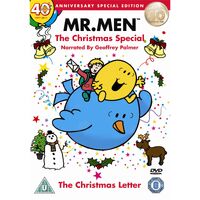 Retrieved from "https://christmas-specials.fandom.com/wiki/The_Christmas_Letter?oldid=161183"
Community content is available under CC-BY-SA unless otherwise noted.