The Conjuring 2 is a 2016 feature film directed and produced by James Wan, who won two awards for this film and his directing skills in the 2017 iHorror Awards, and the sequel to his 2013 film The Conjuring. It stars Patrick Wilson and Vera Farmiga reprising their roles as Edward "Ed" and Loraine Warren (respectively), paranormal researchers and demonologists who travel the world helping people deal with supernatural threats. It is based on the true story of the Enfield Incident, where Ed and Loraine travel to Enfeild, Great Britain during Christmastime to aid the Hodgson family, who are experiencing violent paranormal occurrences in their home.

James Wan confirmed in an interview that he intended for The Conjuring 2 to be a Christmas film, as it plays a part in raising the positivity used to defeat Valak.

The film opens with Ed and Loraine investigating 112 Ocean Avenue in Amityville, New York, where the infamous Amityville Horror occurred. Loraine, a psychic, looks into the house to find that Ronald DeFeo Jr., the perpetrator of the crime, was indeed under the influence of a demonic presence. When Loraine investigates what this presence could be, she has a run-in with a horrible demon in the form of a nun, which she had encountered seven years before that uses "Hark! The Herald Angels Sing" to announce its arrival. The demon shows her a vision of Ed's gruesome death via impalement, causing Loraine to become paranoid and request that they never take another case.

Meanwhile in Enfeild, Great Britain, the Hodgson family is struggling with money and family after the sudden departure of the father. The mother, Peggy, tries to make ends meet, but her four children prove to be a handful. One night, the two daughters Janet and Heather play with a Ouija Board, but are disappointed when it does not work. However, that night, Janet wakes up in another room and Heather hears strange knocking at her door.

Back in America, Ed has visions of the demon nun, and Loraine feels the presence of something demonic. While in her home, she has a nightmarish vision of being attacked by the demon, causing her to thrash around and scribble in the Bible she was reading.

Meanwhile, the paranormal occurrences in Enfeild worsen, as Janet begins seemingly talking to invisible people and speaking in different voices. While Peggy believes it is just paranoia after using the Ouija Board, she sees the activity for herself and rushes the kids to a neighbor's house. When the police arrive, they see the activity as well, and recommend seeking help. Things get worse when the activity follows Janet to the neighbors' house, where they are attacked by a creature called the Crooked Man. Paranormal investigators Maurice Grosse and Anita Gregory help with the case, and schedule media coverage of the incidents to try and reach out. This includes an interview with Janet, who is seemingly possessed during it. The possessor claims it is the deceased Bill Wilkins, and wants its house back and likes basking in the family's fear.

Eventually, as Christmas approaches, the church contacts the Warrens to aid them in determining if it is a hoax or not. Loraine is reluctant based on her visions, but they agree and travel to England to stay with the family. However, while Loraine does not sense anything, the activity worsens as Janet is teleported to a locked room and attacked by Bill. She is saved by Ed's intervention.

The next day, the Warrens try to communicate with Bill, who threatens them, but stutters a disjointed message when a crucifix is held up. The Warrens decide that the malevolent entity feeds off of negative emotion, and reunite the family in Christmas celebrations and sing-along sessions to boost their spirits.

However, as the kids are setting up a Christmas tree, Janet is suddenly possessed again and attacks her brother Johnny. The Warrens intervene, and the ghost of Bill yells another incoherent message as he leaves Janet's body. However, Anita Gregory was filming the room that the incident took place in, and the video seems to show Janet faking the whole thing. The investigators are disappointed and frustrated, and Peggy sends them away for believing Janet was faking everything. Janet then reveals to her sister Heather that the possessor told her it would kill her family if she did not make the investigators leave.

On the train back to the airport, Ed suddenly has a realization. He plays the recordings of the two messages from Bill at the same time, revealing a call for help. Loraine suddenly breaks through, and has a psychic vision of Bill. Bill reveals that he means the family no harm and only wanted to see his family, but another presence kept him there and enslaved him to do its will. When Loraine asks what the entity is and how to stop it, Bill is only able to give a hint as to stopping it before the entity reveals itself as the demonic nun that had been tormenting her and Ed for so long.

As Ed and Loraine rush to return to the house, Janet is fully possessed by the demon, who attacks the family and forces them out of the house. Ed and Lorain arrive as Loraine figures out that they need to know the demon's name to have the power to send it back to Hell. Ed is forced to go after Janet, but a lightning bolt strikes a tree next to the house, leaving a jagged stump resembling the object that impaled Ed in Lorraine's vision. When Ed gets into the house, he is attacked by the demon, who uses steam to blind him and blasts "Hark! The Harald Angels Sing" to disorient him, before changing into its Crooked Man form and attacking him. Ed manages to catch up to Janet, who is about to throw herself from the window. He catches her, but is left dangling over the stump below. Loraine realizes that, in her previous vision, she demanded the demon's name it it was forced to give it. She checks her scribbled-in Bible to find that the demon's name is Valak. She rushes up to help Ed, but is attacked by the demon. However, with her newfound knowledge of Valak's name, she is able to condemn the demon back to Hell, saving Janet and Ed.

All the people involved rest after their victory. After returning to America, Ed and Loraine celebrate Christmas with a dance.

The original score, including two arrangements of two score cues from The Conjuring, was composed and conducted by Joseph Bishara, who won the 2017 ASCAP Music Award. 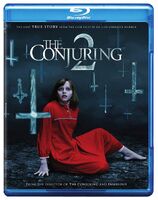 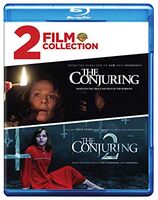