"The Doctor, the Widow and the Wardrobe" is an episode of Doctor Who, in which the Eleventh Doctor visits England in 1938 and 1941 and an alien forest in 5345. The episode was shown in the United Kingdom on Christmas Day 2011 on BBC One, BBC America in the United States and on ABC1 in Australia. It is the seventh Christmas special since the show's revival in 2005. It stars Matt Smith as the Eleventh Doctor and Claire Skinner as Madge Arwell, with cameo appearances by Karen Gillan as Amy Pond and Arthur Darvill as Rory Williams.

During the Christmas season of 1938, the Doctor finds himself on a damaged alien spacecraft in Earth's orbit. He escapes the exploding ship and the fall to Earth by rapidly donning an impact space suit, though in his haste, the helmet is put on backwards. On crashing to Earth, he is found by Madge Arwell, wife of Reg and mother of two children, Lily and Cyril. She helps the Doctor, stuck and unable to see while in the impact suit, to his TARDIS, and the Doctor promises to repay her for her kindness.

Three years later, during World War II, Reg is reported killed in action when the Lancaster Bomber he was piloting disappeared over the English Channel. Madge is told this via telegraph just before Christmas, but decides not to tell her children, hoping to keep their spirits up through the holiday. Madge and the children evacuate the bombings of London to a relative's house in Dorset, where they are greeted by the Doctor, calling himself "the Caretaker"; Madge does not recognise him from their previous encounter.

The Doctor has prepared the house specially for the children and the holiday; though the children are pleased, Madge privately explains about Reg's death to the Doctor and insist he not overindulge the children. During the first night, Cyril is lured into opening a large glowing present under the Christmas tree, revealing a time portal to a snow-covered forest. The Doctor shortly discovers Cyril's absence and follows him with Lily; the two eventually track Cyril down to a strange lighthouse-like structure. Madge, finding her children missing, soon follows them into the forest, but is met by three miners in space suits from the planet Androzani Major.

At the lighthouse, Cyril is met by a humanoid creature made of wood, and places a simple band of metal around his head like a crown. Lily and the Doctor arrive, followed by another wood creature, but find that they have rejected Cyril as he is "weak", as is the Doctor. The Doctor finds that the life forces of the trees in the forest are trying to escape through a living creature. Meanwhile, Madge, holding the miners at gunpoint, is taken back to their mining walker and told that the forest of the planet they are on is scheduled to be melted by acid rain within minutes, killing anything within it. The miners are teleported away safely before the rain starts after helping Madge to locate where her children are.

Madge, using the little knowledge she knows of flying a plane from Reg, directs the walker to the lighthouse and safely reunites with her children. The wood creatures identify her as "strong", and the Doctor realises they consider her the "mothership", able to carry the life force safely though the band's interface. Donning the crown, Madge absorbs the life force of the forest, allowing her to direct the top of the lighthouse as an escape pod away from the acid rain and into the time vortex. To get them home, the Doctor directs her to think of memories of home, allowing Madge to revisit her fond memories of Reg. She realises that she will have to recall the moment of Reg's death, but the Doctor forces her to continue to do so; Lily and Cyril come to learn the truth. Soon, the escape pod is safely out of the time vortex just outside the house in Dorset and the life force of the forest have converted themselves to ethereal beings within the time vortex. The Doctor steps outside while Madge starts to explain Reg's death to Lily and Cyril, but he returns to interrupt her and to tell her to come outside. There stands Reg and his Lancaster, safely rescued by Madge when she was piloting them through the time vortex. The family has a tearful reunion.

As Madge and her family turns to celebrate Christmas, the Doctor attempts to slip away, but Madge discovers him, and as she sees the TARDIS realises that he is the man in the space suit from three years back. She insists on him staying for Christmas dinner, but when the Doctor reveals he has other friends out there that believe he is dead, Madge forces him to go to see them on Christmas. The Doctor offers Madge his help if she ever needs it again.

Later, the Doctor arrives outside Amy and Rory's home, two years since he left them there. Amy pretends to be angry at him for leaving them the way he did, but reveals that River Song told them about his faked death, and Rory reveals that they have been setting a place for him at their Christmas dinner table every year. Having remarked earlier in the episode how "humany-wumany" it is to cry because of happiness, the Doctor finds himself shedding a tear of happiness in reaction to Rory's remark, and grins in wonder. 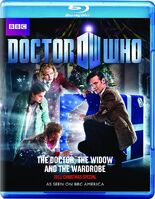 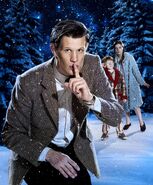 Eleventh Doctor
Add a photo to this gallery

Retrieved from "https://christmas-specials.fandom.com/wiki/The_Doctor,_the_Widow_and_the_Wardrobe?oldid=152644"
Community content is available under CC-BY-SA unless otherwise noted.