The First Christmas: The Story of the First Christmas Snow is a critically-acclaimed Christmas television special produced in stop-motion animation by Rankin-Bass in 1975. It was narrated by Angela Lansbury and costars Cyril Ritchard. It was the first Christmas special that Jules Bass wrote under the pseudonym "Julien P. Gardner" (he would use that name again for The Little Drummer Boy, Book II and The Life and Adventures of Santa Claus).

A few weeks before Christmas, a young shepherd named Lucas is struck by lightning while wandering the countryside with his animals. A group of kindly nuns - Sister Theresa (the narrator), Sister Jean, and Sister Catherine - rescue him, taking him to their abbey nearby. Soon, they and the abbey's priest, Father Thomas, learn that Lucas has not only been blinded by the lightning, but he is an orphan. Father Thomas is slightly irritated, but nevertheless, Lucas is allowed to stay at the abbey while he recovers from the accident, and Sister Theresa becomes a mentor to him. She is the one to tell him about snow, something not he nor anyone else at the abbey has ever seen (the village is "much too close to the sea"). Lucas is fascinated and begins to dream of a "white Christmas".

Later on, Father Thomas tells Sister Theresa of his plans to send Lucas to an orphanage after Christmas time. Lucas overhears this and is heartbroken. In the meantime, Lucas gets to participate as an angel in the abbey's Christmas pageant with some other children from the village. There, he meets a girl named Louisa, another one of the angels who immediately befriends him. Lucas shares with her his dream of seeing snow for the first time.

On Christmas Eve, Lucas realizes that he won't be able to take his animals, a herd of sheep and a dog named Waggles, to the orphanage with him after Christmas. He tells Waggles that he has decided to give her and the sheep to Sister Theresa as a Christmas present. At the same time, three mischievous boys who are in the Christmas pageant with Lucas have been eavesdropping on him and decide to lock the sheep in a shed as a prank. Shortly afterwards, though, the sheep get out and run into the wolf-ridden forest nearby, and Lucas sets out to find them. The boys admit to Sister Theresa what they have done before following Lucas into the forest to help find the sheep. When they arrive, Lucas has found all of his sheep except Woolly, who has fallen into a deep hole. Lucas and the other boys work together to save Woolly, and just in time for the Christmas pageant!

At the Christmas pageant, after the children sing their song, "The First White Christmas", it begins to snow. Louisa excitedly explains this to Lucas, who is so happy that he cries. Miraculously, Sister Theresa explains, these tears restored Lucas's sight, "not just for the moment, but for good".

After the pageant, a small party is held, where Lucas gives Sister Theresa his animals. Sister Theresa is flattered, but explains to Lucas that she wouldn't be fit to care for the animals, and invites him to stay at the abbey to watch over them instead of going to the orphanage. Even Father Thomas agrees, saying, "I do feel that the best place for a boy with no parents is with people who love him." Lucas is thrilled and remarks that this Christmas has been the "first real, happy Christmas of [his] life".

The special originally premiered on NBC on December 19, 1975. It later aired on CBS, usually as the last Rankin/Bass special aired for the season. In the 1990s and 2000s, it was then aired as part of ABC Family's annual 25 Days of Christmas event, but was dropped as a regular part of the lineup in 2011, only briefly returning to the lineup for 2012 and 2015. As of 2020, it currently airs uncut on AMC as part of their annual Best Christmas Ever programming block.

There have been two VHS releases of the special, the first one released by ABC Video Emterprises, thru Golden Book Video, in 1987, and the second one released by Warner Home Video in 1993. Warner later released a Deluxe Edition DVD of the special on October 2, 2012. The DVD was repackaged along with three of Warner's other Rankin/Bass Christmas DVDs in the 4 Kid Favorites: Merry Masterpieces box set, released on October 13, 2015. 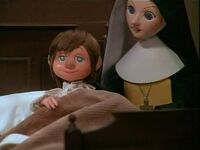 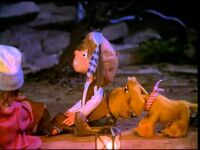 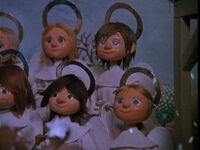 Retrieved from "https://christmas-specials.fandom.com/wiki/The_First_Christmas:_The_Story_of_the_First_Christmas_Snow?oldid=193901"
Community content is available under CC-BY-SA unless otherwise noted.