DVD
iTunes
Amazon Instant Video
Paramount+
"The Fright Before Christmas!" is the Christmas episode of the Nickelodeon animated series Danny Phantom, aired as the tenth episode of the show's second season (though it is actually the season's seventh episode in production order).

On his Facebook account, David Kaufman, the voice of the series' protagonist, stated this is one of his favorite episodes.

Snow falls in Amity Park as Christmas approaches, and everyone is Christmas shopping at Amity Park Mall, including the trio of friends. While Sam is in a chipper mood, Danny is grumpy and annoyed. When she calls him out on his Scrooge-like attitude, Tucker tells her about "the fight": every Christmas, Maddie and Jack argue over the existence of Santa Claus, wreaking all sorts of havoc in Danny's life. Even as they are talking, they hear Maddie telling nearby children visiting the mall that Santa does not exist while Jack states otherwise.

Frustrated, Danny flies to the Ghost Zone, destroying Christmas items to reduce stress. At the same time, the Ghostwriter has completed his Christmas poem, The Fright Before Christmas. Danny accidentally destroys the poem, but does not feel so bad due to his hatred of the holiday. Enraged at his behavior, GhostWriter writes a new book, The Fright Before Christmas 2, starring Danny, and blasts him back to Amity Park, where he is now stuck in a rhyming-induced Christmas story in which anything that the GhostWriter writes comes true until Danny's lesson is learned.

Wanting to know why Danny hates Christmas so much, Sam's question is answered when Tucker relates the story that every single Christmas, Danny's parents' argument over the existence of Santa usually ends with Danny getting the short end of the stick, leading to traumatic childhood memories. The GhostWriter then turns all the reindeer at the mall into ghosts, leaving Danny to fight them off, destroying most of the mall in the process and causing everyone to blame him. At home, it is not any better as his parents still argue, causing him to finally explode and leave the house. As he turns ghost and begrudgingly flies away, presents float and trail behind him from the neighboring homes, angering everyone further, including his family and friends.

To further cause trouble, the GhostWriter brings all the toys to life. They all join together to form into a giant nutcracker toy. Danny blows it to pieces, but also destroys all the toys, which upsets everyone once again. GhostWriter adds further insult to injury by bringing all the Christmas trees to life and turning them into monsters as well, surrounding Danny. As he handles the monsters, the news reports of the mutant trees cause Jack to put up the Ghost Shield and Maddie to stop squabbling with her husband long enough to go out and save her son. Danny destroys the trees with his Ghostly Wail before turning human in time for his mother to come and claim him, both returning home.

Danny enters the Ghost Zone to confront GhostWriter at his home afterwards, but GhostWriter types it so that Danny ends up in another place, one holding his ghostly foes. However, instead of a battle, the ghosts hold an "annual truce" where they do not fight on Christmas, instead befriending each other for the day. The GhostWriter expects them to suspend the truce in order to attack Danny, but they do not, regarding the truce as equally applicable to half-ghosts. When Danny explains that GhostWriter broke the truce, all the ghosts set out to attack him. The GhostWriter, however, quickly writes away the truce, causing all the ghosts to battle one another instead. Danny then takes an orange to Walker's face, but since nothing rhymes with "orange", the writing spell wears off for the time being and the ghosts commence attack on GhostWriter. Danny destroys his Quantum Keyboard and GhostWriter is arrested by Walker and his cops, but Danny is still stuck in the poem, because the story cannot end until he learns a lesson.

Danny sadly leaves the Ghost Zone, without saying a word, and returns to the now depressing human world. He sits down, ashamed and in sorrow - when his friends come to comfort him. There, he expresses his guilt over ruining Christmas, his speech causing all the presents to be fixed. Wanting to make things right, Danny and his friends, as well as his ghostly foes, all help return the gifts, Christmas trees, and other holiday items back to their rightful homes, restoring Christmas once and for all.

Danny bids the ghosts a fond farewell afterwards and leaves for his own house where he apologizes for acting in spite, seeing the family celebrates Christmas their own way. Then all his ghostly enemies fly off via sleigh pulled by the ghost reindeer to which Jack and Maddie give chase, the latter finally believing in Santa Claus. The episode ends with GhostWriter in jail, now finished with his new book (and teased by Walker by being given an orange). 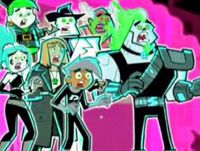 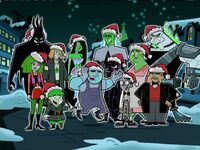 Retrieved from "https://christmas-specials.fandom.com/wiki/The_Fright_Before_Christmas!_(Danny_Phantom)?oldid=191871"
Community content is available under CC-BY-SA unless otherwise noted.