The Husbands of River Song is the eleventh Christmas special of British sci-fi drama series Doctor Who. It was first broadcast on Christmas Day of 2015.

It’s Christmas Day on a remote human colony and the Doctor (Peter Capaldi) is hiding from Christmas Carols and Comedy Antlers. But when a crashed spaceship calls upon the Doctor for help, he finds himself recruited into River Song (Alex Kingston)'s squad and hurled into a fast and frantic chase across the galaxy. King Hydroflax (Greg Davies) is furious, and his giant Robot bodyguard is out-of-control and coming for them all! Will Nardole (Matt Lucas) survive? And when will River Song work out who the Doctor is? All will be revealed on a starliner full of galactic super-villains and a destination the Doctor has been avoiding for a very long time. 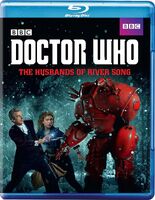 Retrieved from "https://christmas-specials.fandom.com/wiki/The_Husbands_of_River_Song?oldid=152615"
Community content is available under CC-BY-SA unless otherwise noted.