The Legend of Frosty the Snowman

The Legend of Frosty the Snowman is a 2005 direct-to-video film that serves as a reboot to Frosty the Snowman. It was produced by Classic Media, the rights holder for the pre-1974 Rankin/Bass library (prior to being acquired by DreamWorks Animation in July 2012), and animated by Studio B Productions in Vancouver, British Columbia, Canada. It also aired annually on Cartoon Network for a few years in the US, and on CBC Television in Canada. Since 2019, AMC began airing the film in the US as part of their Best Christmas Ever lineup.

After a magical hat strongly escapes the locked-up chests in an attic and flies out through a window, we see the picture-perfect town of Evergreen, where all the local children are bound to a ridiculously strict curfew and not allowed to have any kind of fun whatsoever. One calm boy living in that town is named Tommy Tinkerton, the son of Theodore, who is the town’s impossibly upbeat but no-nonsense mayor. Another storyline stars Tommy’s best friend, Walter Wader, who shocks everyone, especially his very strict mother, befriends "a magical snowman" named Frosty and first-time have fun in the woods in Evergreen.

One day, Walter’s rule-breaking gets all the kids of Evergreen talking, but it greatly upsets Principal Pankley, who is even more adamantly opposed to magic than Theodore (who betrays Tommy that he is under Pankley's control after Walter tells the truth to Theodore). Principal Pankley uses the arrival of Frosty to sow doubts among the townspeople about Theodore’s leadership, and little by little he begins to take over the town.

But once magic is stirred up, it isn’t easily contained. One by one, Frosty wins over the other kids of Evergreen, including Tommy's older bullying brother Charlie, Tommy's lonely love interest Sara Simple (a sharp and independent young girl who wants to be an urban planner); and the happy-go-lucky triplets, Sonny, Sully, and Simon Sklarow. Frosty befriends each of them through the simple means of believing in them, which inspires them to begin to believe in themselves. Increasingly desperate to deny the existence of Frosty and keep Evergreen fun-free, Principal Pankley tricks Walter Wader into helping him lure Frosty for some ice-skating fun, then tricks Frosty into venturing onto thin ice. Before Walter can save his friend, Frosty, realizing it's too late to escape, falls through the ice and melts, causing Walter to get heartbroken and start sobbing. Principal Pankley captures Frosty’s hat, which is the key to his magic.

As all of this unfolds, Tommy Tinkerton, the first one to whom Frosty appeared, has been sitting on the sidelines, watching his best friend, his brother, and his love interest experiencing adventure and magic in which he could share. But he has held back, even though he yearns to meet Frosty, out of loyalty to his dad (because he knows his dad would disapprove of him acknowledging the existence of magic). Everything changes, though, when Tommy finds a secret room beneath the library, in which he discovers a comic book filled with secrets about Frosty.

At first, most of the comic book is blank, but each time Tommy checks it, new panels appear. Over the course of several scenes, Tommy learns that Frosty’s magic is in his hat; that his dad met Frosty when he was a boy, and did believe in magic once upon a time; and that Principal Pankley, a childhood friend of his father’s, took Frosty’s hat and hid it away in an attic (the same attic from which the hat escaped at the beginning of the film), causing young Theodre to lose his faith in magic. The comic book also reveals to Tommy what Principal Pankley has just done (with Walter Wader’s unwitting help) to recapture Frosty.

All this time, Tommy has held back from befriending Frosty out of loyalty to his dad, who has always told Tommy not to believe in magic. But now Tommy sees that his dad once believed in magic, too, but was tricked into losing faith. And Tommy realizes that the most loyal thing he can do is not to hide from magic, but to help his dad rediscover that magic is indeed real. Tommy explains what’s really going on to a now-reformed Charlie, Sara, Walter, and the Sklarow triplets, and leads a daring rescue of Frosty’s hat in which all the kids help out.

A final battle between Principal Pankley, Walter, Tommy, Charlie, Sara and the Sklarow triplets playing "capture the flag" with the hat as the flag features a climactic series of scenes follows in which Pankley tries and fails to recapture the hat, then tries to deter the townspeople (including Theodore) from going into the woods to see what all the ruckus and noise are about. But Theodore refuses to be deterred, and Tommy is able to reintroduce his dad to the old friend, who Theodore had long since stopped believing in.

Meanwhile, the other parents are confused and angry: why are their kids out at night? And can this magical snowman they’ve been hearing about be real after all? Principal Pankley tries to stir them up to regain control of the situation, but Theodore, now finally realizing what an evil liar Pankley truly is, intervenes and reappoints himself as mayor. Walter Wader breaks the spell by throwing a snowball at Principal Pankley. And one by one, the other kids and parents join in, until the town of Evergreen, which had forgotten how to have fun, gives itself over joyously to a “snowball-fighting, horseplaying, lark of a good time.”

The police arrest Principal Pankley and the children reconcile with their parents. An epilogue shows us Evergreen transformed into spring—with Charlie playing football, Tommy skateboarding, Theodore doing magic tricks (in honor of his father), Sara reading a book about urban planning (before she gave up on her dreams and be with Tommy instead) and letting the parents take care of their children. The rules and curfews have also been removed.

All the time, the story has been narrated (à la Our Town) by a warm, wise, seemingly omniscient old man named Thomas who had appeared periodically and comments on the events unfolding in Evergreen. The final scene reveals that he is Tommy, all grown up, now married to Sara and telling the audience his own story.

Unless of course, by an accident.

"I've gotta do something."

Sara and the brothers sledding away.

"Mother, why are you so popularity with my father?"

Sara meets Frosty outside the window.

Tommy on a daring Frosty rescue!

Tommy discovers his dad's past in the photo and a comic book.

"Horse-playing and lark of the good times."

"You're looking for me?" 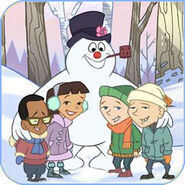 The Legend of Frosty the Snowman Full Wide-block-screen

"He was real all the long."

Frosty jumps above the thin ice

Frosty falls through the ice!

Sara Simple calling out for help 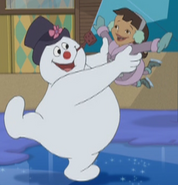