The Leprechauns' Christmas Gold is a 1981 animated television special produced by Rankin/Bass, featuring the vocal talent of Art Carney.

Young Dinty Doyle digs up a pine tree on an uncharted Island where leprechauns live. Unfortunately, he unintentionally releases Old Mag the Hag, a banshee seeking gold before Christmas. Now Blarney Kilakilarney's gold is out in the open. Can Dinty keep Mag from taking the gold for her own purpose?

The special is first made available on the Double Feature VHS, pairing up with Frosty's Winter Wonderland, released in 1985 by Vestron's sub-label Lightning Video. After Vestron's went backrupt and Warner Bros. acquiring the distribution rights to the post-1973 Rankin/Bass specials, Warner Home Video released The Leprechauns' Christmas Gold on VHS in 1993. Currently, the special has never had its own individual DVD release, but it was made available on Warner's Classic Christmas Favorites DVD box set in 2008, and on the Santa's Magical Stories box set in 2011, both times sharing a disc with How the Grinch Stole Christmas! Its most recent DVD release was in the Rankin/Bass TV Holiday Favorites Collection manufacture-on-demand DVD, released by Warner Archive on July 30, 2012.

The special was aired as part of ABC Family's annual 25 Days of Christmas programming block from 1999 to 2010. As with all the Rankin/Bass specials that were broadcast there, it moved to AMC's own programming event, Best Christmas Ever, in 2018. 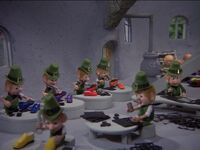 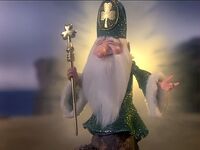 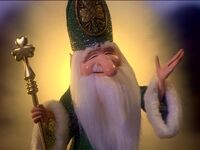 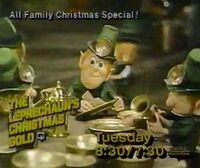 Retrieved from "https://christmas-specials.fandom.com/wiki/The_Leprechauns%27_Christmas_Gold?oldid=164324"
Community content is available under CC-BY-SA unless otherwise noted.