VHS
DVD
The Life & Adventures of Santa Claus is a 1985 Christmas television special produced in stop motion animation by Rankin/Bass, and notably the studio's last Christmas special before its closure in 1987. It is based on the 1902 children's book of the same name by L. Frank Baum.

A council meeting is held where Ak tell the story of Santa Claus. It happened many years ago when Ak finds a orphaned baby in the snowy woods. He relied on a lioness named Shiegra to raise it. But a fairy named Necile, hearing of the discovery of the infant, steals and hides him from Ak. He agrees and Necile gets to raise the child with the help of Shiegra. She names him Claus.

When Claus became a man, he learned that he must live with other mortals. So he set up a workshop and lived in a small village with Tingler, an elf, and Shiegra. He makes toys (the first a black cat, after a kitten he found), and the children love him. One day as he was delivering toys he is attacked by some villains. He ends up getting the toys back. When Ak sees he is valuable and must live long, the council decides to give him immortality. Thus the name Santa Claus is given to him, who now delivers gifts on Christmas Eve to good children.

The special truncates much of the story (it ran in a one-hour time slot) and simplifies some of the motivations, but its major alterations from the book are setting up the hearing over the Mantle of Immortality as a frame story explaining just why Claus (J. D. Roth/Earl Hammond) deserves the mantle, although there is an edit that makes it difficult to realize that the scene in which Ak (Alfred Drake) calls the council when first finding the infant in the woods does not occur in the same time period as the main story.

In addition, Shiegra accompanies Claus to the Laughing Valley, in which, unlike the book, it is always Winter. A similar compromise toward popular culture is Claus' now eight reindeer, albeit unnamed. Peter Knook, a rather crusty but amiable fellow, replaces most of the other Knooks, save the Protector (King) and two strangers, and declares "only on Christmas Eve" for the reindeer without any argument or explanation. One important new character, Tingler, a Sound Imp (Robert McFadden) also accompanies Claus and gives him someone to talk to.

When the show premiered, the book was not as easily available, and many Oz fans who only knew of the book were surprised to discover that Tingler was not one of Baum's creations, so true was the character to the author's spirit. Earle Hyman portrayed the King of the Awgwas, and Leslie Miller played Necile. Most of the other voices were performed by Peter Newman and Lynne Lipton. Larry Kenney was the Commander of the Wind Demons, who initially served as a devil's advocate to Ak at the fateful hearing, but soon became the Immortal most approving of giving the Mantle to Claus. Most of the Immortals' titles were changed to alleviate them all being kings and queens.

Screenwriter Julian P. Gardner created a musical production number, "Big Surprise" as the children at Weekum's orphanage plead Santa Claus for more toy cats. Other songs include the chorus "Babe in the Woods" and the powerful chant, "Ora e Sempre (Today and Forever)" representing the immortals. Bernard Hoffer composed the music, as well as setting a quatrain by Baum inspired by Claus' famous laugh. The presentation of the Christmas tree is different; Claus, realizing his death is imminent, decorates a tree with ornaments and suggests it should be his memorial.

The special is currently distributed by Warner Bros. Television as is with much of the post-1973 Rankin/Bass programs, as Telepictures (prior to its' purchase by Time Warner's Entertainment division) took over ownership of Rankin/Bass.

Originally broadcast on CBS, this special aired annually on the ABC Family cable network (as part of the 25 Days of Christmas), along with most of the other Rankin-Bass animated Christmas specials, from 1998 to 2012. It was oddly absent from the line-up in 2014, then was put back in 2015, and was dropped again after the channel was rebranded as Freeform in 2016. The version seen on ABC Family appeared to be edited differently, with several of the songs whittled down and the Great Ak's world tour notably missing some of the darker scenes of abuse and neglect of children.

In 2018, the special, along with the other post-1973 Rankin/Bass Christmas specials, moved to AMC for their own annual programming event, Best Christmas Ever, airing uncut.

Warner Home Video made the special available on VHS in 1993. The special was eventually made available on DVD in 2009, through the Warner Archive Collection. As it is a manufacture-on-demand release, it is only available for order online. The DVD also includes Nestor, the Long-Eared Christmas Donkey (which itself was already available on the DVD releases of The Year Without a Santa Claus). 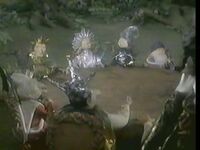 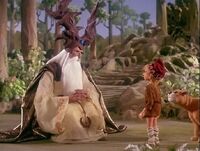 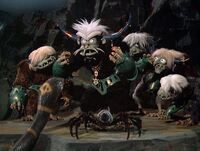 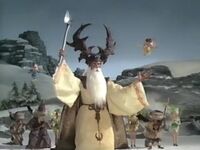 Retrieved from "https://christmas-specials.fandom.com/wiki/The_Life_and_Adventures_of_Santa_Claus_(1985)?oldid=180228"
Community content is available under CC-BY-SA unless otherwise noted.