This article is about the 1968 Rankin/Bass television special. For the original song, see The Little Drummer Boy (song).

The Little Drummer Boy is a Christmas television special produced in stop-motion animation by Rankin/Bass. It was originally broadcast on NBC on December 16, 1968.

Romeo Muller said that, of all the specials that he wrote for Rankin/Bass, this one was his personal favorite.

The Little Drummer Boy tells the story of a young drummer boy named Aaron, a lonely orphan after desert bandits stole his family's sheep, killed his parents and burned their farm. His only companions are Baba (a lamb), Samson (a donkey) and Joshua (a camel). Aaron's animal friends like dancing to the song of Aaron's drum, given to him by his father before his death. One day, Aaron, Baba, Samson and Joshua are captured by a performer named Ben Haramed and his lanky partner Ali.

After the capture, Ben Haramed talks Aaron into joining their show caravan and performing, though Aaron has vowed to hate all people for what they had done to his family and joyful life. When the trio and the animals arrive in Jerusalem, they roll out the carpet and begin the show with two unsuccessful Chinese tumblers and Ali, who attempts to juggle pots and ends up breaking them. Aaron then performs "Why Can't the Animals Smile" with some assistance from Baba, Samson and Joshua. The audience loves it and begs for more, but Aaron becomes angry at them for being happy after the painful loss of his parents. His vow to hate all humans overtakes him, and the bewildered crowd chases the performers out.

Soon after setting up camp, Ben Haramed and Ali discover the caravan of the Three Kings. Ben Haramed promises Aaron he will give him half of the money and set him free if he does a performance for the Kings. Aaron agrees, but to Ben Haramed's dismay, the Kings are leaving to follow the star of Bethlehem and have no time for a performance. But one of the Kings' camels collapses and is not able to go with them. Then, to Aaron's horror, the Kings remember seeing a camel with the trio, and Ben Haramed sells Joshua. Determined, Aaron leaves Ben Haramed and Ali with Samson and Baba to follow the Kings' caravan and reclaim Joshua.

They resort to following the star of Bethlehem and soon come upon the barn, the birthplace of Jesus Christ. The three spot Joshua and, happily, they run to meet him. Unfortunately, a horse-drawn cart comes rolling past and injures Baba. Heartbroken and carrying Baba, Aaron leads Samson and Joshua to one of the Three Kings. He begs him to save Baba, but is told instead that nothing can be done. Aaron is then told to go look upon the newborn King, the baby Jesus, and give him a gift. Aaron does not understand, but reluctantly lays down his beloved lamb and approaches the baby Jesus. Aaron plays a song on his drum, while the Vienna Boys Choir sings the Little Drummer Boy song. Baby Jesus then smiles at Aaron. After the song, Aaron finds out that Baba is alive. He then realizes that the vow he had made and kept on the night of his parents' death was wrong. The Christmas star still shines in the sky, protecting and illuminating Bethlehem forevermore.

As of 2016, the special is currently owned by NBC Universal, who obtained all rights to the pre-1973 Rankin/Bass library when they purchased Classic Media's parent company, DreamWorks Animation, in April 2016.

The special has been distributed on home video by Family Home Entertainment from 1989 to 1997, by Sony Wonder from 1998 to 2004, by Genius Products from 2007 to 2009, and by Vivendi Entertainment in 2011. Of particular note, it was originally included as a bonus special on Sony Wonder's first two DVD releases of Santa Claus is Comin' to Town, before later getting its own DVD releases in subsequent years. It was later included in Universal's Original Christmas Classics Deluxe Edition DVD and Blu-ray box sets in 2018, sharing a disc with Cricket on the Hearth, and then got its own individual Blu-ray release the following year. For some reason, the print used on the DVDs and Blu-ray releases uses an incomplete audio mix that is missing much of the sound effects and also has Greer Garson's narration briefly switch to a scratch track recorded by Paul Frees for one line. Furthermore, the 2018 DVD and Blu-ray release adds two additional commercial fade-outs. 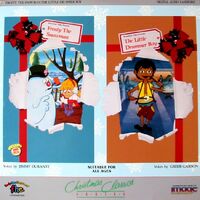 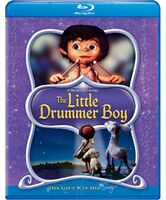 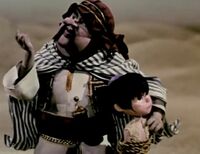 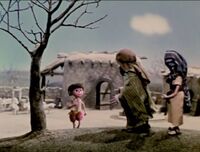 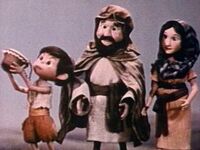 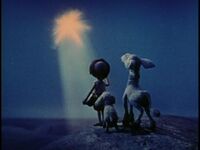 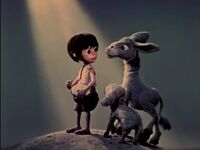 Retrieved from "https://christmas-specials.fandom.com/wiki/The_Little_Drummer_Boy_(Rankin/Bass)?oldid=188932"
Community content is available under CC-BY-SA unless otherwise noted.