In this adaptation of the Christmas story, narrated by Gonzo as Charles Dickens (with the occasional commentary of Rizzo the Rat), it is Christmas Eve in 19th century London. The merriment is not shared by Ebenezer Scrooge, a surly money-lender who is more interested in profit than celebration. He is so cold to the season of giving that his book-keeping staff, including loyal employee Bob Cratchit (played by Kermit the Frog), have to plead with him just to have the day off work during Christmas by pointing out that Scrooge would have no customers on the holiday and that it would waste coal to sit alone in the office. Scrooge's nephew, Fred, arrives to invite his uncle to Christmas dinner, and two gentlemen (Dr. Bunsen Honeydew and Beaker) also come to Scrooge's offices, collecting money in the spirit of the season to provide a Christmas dinner for the poor. Scrooge rebuffs his nephew and complains that it is not worth looking after the poor, as their deaths will decrease the surplus population. Fred is shocked at his uncle's uncharitable and cold nature, but repeats his invitation, makes his own donation, and departs.

Later that evening, Scrooge finds himself face to face with the still mean-spirited spirits of his former business partners, Jacob and Robert Marley (Statler and Waldorf), who have been condemned to shackles in the afterlife as payment for the horrible deeds they committed in life. Nonetheless, they warn him that he will share the same fate, only worse, if he does not change his ways, and foretell the arrival of three spirits throughout the night.

Scrooge is first visited by the Ghost of Christmas Past, a childlike specter who takes Scrooge on a journey back through time to his youth. He recalls his early school days, during which he focused on his studies; meeting of a young woman named Belle, with whom he would later fall in love; and the end of their relationship, despite Scrooge's protests that he would marry her as soon as he feels he has enough money to provide for them, but Belle knows he will most likely never have that, given his birthing obsession with money.

Scrooge then meets the Ghost of Christmas Present, a large, festive spirit with a booming voice who lives only for the here and now. He gives Scrooge a glimpse into the holiday celebration of others, including Bob Cratchit, and his family who, although poor, are enjoying Christmas together and reveling in the anticipation of the Christmas goose. Among them is his youngest son Tiny Tim (Robin the Frog), who is terminally ill and isn't eating enough due to Bob's lack of money. The Spirit also shows Scrooge's own family, who are not above cracking jokes at Scrooge's expense. The Spirit warns Scrooge that if he does not pay Bob, then there will likely be an empty seat where Tiny Tim is currently sitting.

Finally, Scrooge meets the Ghost of Christmas Yet to Come, a silent entity who reveals the chilling revelation that Tiny Tim will not survive the coming year and pass away, thanks in no small part to the impoverished existence of the Cratchit family. Furthermore, it is revealed that when Scrooge's own time has passed, others will certainly delight in his absence from the world. Upon seeing his headstone in the cemetery, it is the final epiphany that convinces Scrooge to change his ways, and makes him vow to celebrate with his fellow man.

Scrooge returns to his bedroom on Christmas Day, and he goes about the town spreading good deeds and charity. He enlists the help of Bean Bunny, at whom he threw a wreath earlier in the film, and the two travel around the town gathering items for a Christmas feast and giving gifts to characters who had previously been wronged by Scrooge. Scrooge tells his assistant, Bob Cratchit, that he is going to raise his salary, and pay for his house mortgage. It is also revealed that, as a result of Scrooge's transformation, Tiny Tim will not die the premature death predicted by the final ghost. In the meantime, Scrooge plans a feast for Cratchit's family, and learns to adopt the spirit of Christmas throughout the year, now encouraged by his many new-found friends.

Songs featured in the film include:

The song "When Love is Gone" was cut from the film's original theatrical release, because the filmmakers found that the test audiences (mainly family viewers with younger children) became restless during the scene in question. When the movie was released on VHS and Laserdisc in the United States and the United Kingdom the following year, "When Love is Gone" was reinstated, since the filmmakers decided it worked better in a home-viewing context, and that audiences would appreciate its inclusion. Subsequent video releases of the film have included the song, with the 2005 DVD release also containing the original theatrical version. The song is also present as a bonus feature with the film on Disney+, but the UK DVD release and the 2012 Blu-ray release did not include the song.

Two extra songs were also written for the film by Paul Williams - "Room in Your Heart" (sung by Bunsen and Beaker), and "Chairman of the Board" (sung by Sam the Eagle). These two songs were dropped from the script early on because the filmmakers felt the film was already going to be quite lengthy, that the songs didn't help progress the story, and that they would hurt the overall pacing and feel of the film. However, since the filmmakers did not want the songs to go to waste, they were included on the film's soundtrack album.

4860-30017-2 (original release)
61414-7 (2005 reissue)
The Muppet Christmas Carol Original Motion Picture Soundtrack was initially released by Jim Henson Records in 1992 in conjunction with the film's theatrical release. It was subsequently reissued by Walt Disney Records in conjunction with the 2005 DVD release, and later as a digital download in 2012. The album contains all of the songs featured in the film, including the above-mentioned deleted songs. Portions of the film's score, composed by Miles Goodman, were also included on the album.

The track listing was as follows:

Disney released the movie on DVD for the first time on October 8, 2002. In addition to the pan-and-scan "home video edit" of the film, the DVD contained an audio commentary by director Brian Henson, a 22-minute making-of documentary, an educational featurette about worldwide Christmas traditions starring Gonzo and Rizzo, and a production outtakes reel.

Three years later, Disney released the film on DVD again, this time as part of their "Kermit's 50th Anniversary Edition" series (in which they also released new DVDs of The Muppet Movie, The Great Muppet Caper, and Muppet Treasure Island). The 2005 DVD featured the film in both its original theatrical cut (presented in widescreen) and the home video edit (presented in pan-and-scan). It also contained most of the extra features from the previous DVD (with the strange exception of the making-of documentary) as well as a new "Pepe's Profiles" featurette profiling Gonzo.

A 20th Anniversary Edition Blu-ray / Digital Copy combo pack, labeled the "It's Not Easy Being Scrooge" Edition, was released on November 6, 2012, alongside a reissue of the 2005 DVD release (with new cover art and a different label). The Blu-ray contained all of the bonus features from the previous two DVD releases, plus a second audio commentary by the Muppets; however, the film was presented without the "When Love is Gone" song. A combo pack containing the DVD, the Blu-ray, and the Digital Copy was also made available exclusively on Amazon.com. 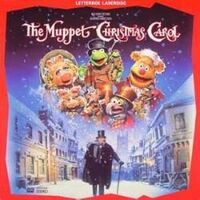 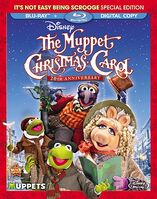 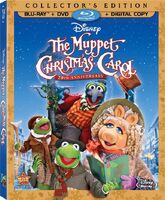 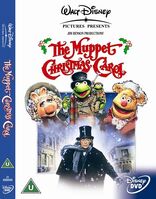