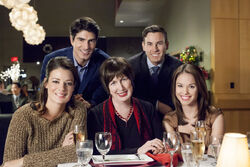 The Nine Lives of Christmas is a Hallmark Channel book-based movie, based on the book of the same name by Sheila Roberts, starring Brandon Routh, Kimberly Sustad and Gregory Harrison. It premiered on November 8, 2014, as part of the channel's fifth annual Countdown to Christmas event, and was released on DVD three days later.

With Christmas approaching, a handsome fireman afraid of commitment adopts a stray cat and meets a beautiful veterinary student who challenges his decision to remain a confirmed bachelor.

Retrieved from "https://christmas-specials.fandom.com/wiki/The_Nine_Lives_of_Christmas?oldid=150331"
Community content is available under CC-BY-SA unless otherwise noted.