The Nutcracker Prince is a 1990 animated film made by Lacewood Productions and released by Cineplex Odeon Films in Canada and Warner Bros. Pictures in the United States. The film was based on the story The Nutcracker and the Mouse King by E.T.A. Hoffmann and influenced by its ballet adaptation. The film features the voice talents of Megan Follows as Clara, Kiefer Sutherland as the Nutcracker and Peter Boretski as Uncle Drosselmeier. Music from Pytor Ilyich Tchaikovsky's ballet rendition is used at throughout the film as the main instrumental soundtrack.

Clara's family are celebrating the night before Christmas Eve. Clara is jealous because her sister, Louise, has a boyfriend, leaving Clara feeling blue until the eccentric Uncle Drosselmeier arrives at their home with special gifts: a fully-automated toy castle for everyone, and a Nutcracker for Clara. Upon giving her the Nutcracker, Drosselmeier tells her a story about how the Nutcracker came to become the Prince of the Dolls.

The Story of the Nutcracker

In a faraway kingdom, there was a King and Queen who had a beautiful daughter named Princess Perlipat. To celebrate the King's birthday, the Queen ordered a special cake made out of blue cheese, the King's favorite. However, the scent of the blue cheese drew out out all the mice, who eat and destroy cake. The King was enraged and commanded his inventor, whose name also happened to be Drosselmeier, to capture all the mice. Drosselmeier and his nephew Hans were successful in capturing all the mice except the Mouse Queen and her only son.

In revenge, the Mouse Queen cast a spell on Perlipat, causing her to become hideously ugly. Drosselmeier was once again given the task of figuring out how to cure her. He eventually learned that the fabled Krakatooth Nut can cure her, on the condition that it is cracked open in the teeth of a young man who is not wearing boots. The King commands all the princes and noblemen to apply, on promise of the reward of being able to marry Perlipat once she is cured. However, the Krakatooth is so hard that all the men's teeth shatter upon trying to crack it.

Drosselmeier is about to be punished for being unable cure Perlipat when Hans steps in. He manages to crack the nut open between his teeth and gives it to Perlipat. The Mouse Queen, who is angered by this, casts a spell on Hans, turning him into the Prince of the Dolls. Hans collapses and transforms into a Nutcracker. During the ruckus, the Mouse Queen's son's tail is caught from the fallen statue and his tail becomes bent. Also the Mouse Queen is crushed by a statue, leaving her son to become the Mouse King. Drosselmeier is exiled from the kingdom for trying to pass a "Nutcracker as a son-in-law", while the King and Queen celebrate with their cured daughter.

Revenge of the Mouse King

Clara is upset by the story for its unhappy ending, but is consoled when Drosselmeier tells her that the spell can be broken. That night, when everyone has gone to sleep, Clara ventures into the sitting room to dance with her Nutcracker. Suddenly the Mouse King arrives, intent on getting his revenge on the Nutcracker for his injured tail. The Nutcracker and all dolls in the room come to life to battle the Mouse King's army. The first battle is briefly stopped when Clara throws her slipper to the Mouse King before he can burn the Nutcracker, though she gets injured herself, losing consciousness for the rest of the night while the toys (offscreen) revert back to the way they were. The next morning, she tries to tell her mother about the battle, only to be told to rest and not hear any more fairy stories right away.

The next night, the Mouse King returns, angry on what Clara did. Before he could go after the Nutcracker once more, Clara tricks him, briefly trapping him for the moment. However, when she retrieves the unawakened toy, the Mouse King himself confronts her, threatening to rid of her kitten, Pavlova, if she doesn't hand the Nutcracker over. Suddenly, the toys once more awaken. The Nutcracker and Mouse King then battle one another one on one. The Mouse King is supposedly defeated when he is stabbed in the chest and falls from the Christmas tree while the leaderless army of mice run away. When the toys see that Pantaloon, one of the Nutcracker's generals, has been injured in the fight, they have to return to the Land of the Dolls to revive him. Clara is then shrunken down to doll size thanks to Drosselmeier's magic.

Land of the Dolls

Clara follows to the toys to the Land of Dolls, which is in Drosselmeier's toy castle. Once they are there, Clara dances with the Nutcracker, who asks her to stay with him. Clara sadly refuses, saying that she has to return home and grow up. As the dolls start to turn back into inanimate toys, a dying Mouse King arrives for one last chance at revenge. Clara manages to keep him at bay, and he eventually falls off the Toy Castle to the river below.

Clara wakes up to find herself back home, and there is no sign of the events that she has experienced except her brother's statement that the family discovered a dead mouse near the castle. She rushes to Uncle Drosselmeier's workshop and begs him to tell her whether the fairytale he'd told her is true. Clara is suddenly silenced when a young boy enters the room, carrying a clock. Drosselmeier introduces the boy as Hans, whom Clara recognizes as being her Nutcracker in human form.

The film was released on VHS and Laserdisc in the 1991 Christmas holiday season, using the exact U.S. release. That same master has been reused for the 1996 VHS as one of the eight titles of Warner Bros.' Clsssic Tales collection, alongside the UK theatrical feature Richard Aadams' Watership Down and six other animated TV specials.

It has been released on DVD a few times. It was initially released by Hollywood DVD on October 14, 2001.[1] A Region 1 DVD was released by Good Times Video on November 9, 2004.[2] On April 2, 2007, it was re-released by Boulevard Entertainment.[3] Both releases have no extras besides animated menus and a theatrical trailer. 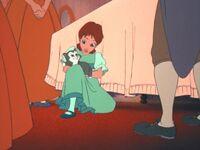 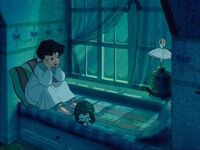 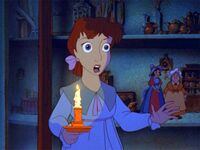 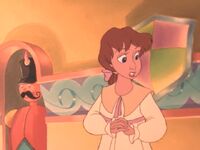 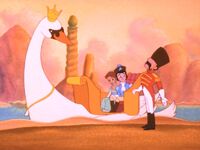 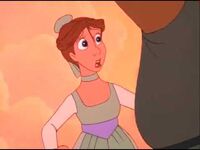 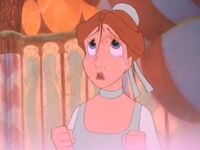 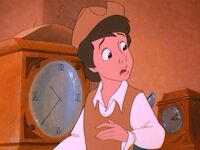 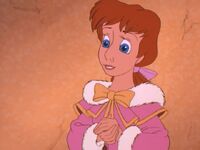 Retrieved from "https://christmas-specials.fandom.com/wiki/The_Nutcracker_Prince?oldid=171552"
Community content is available under CC-BY-SA unless otherwise noted.