The Polar Express is a 2004 computer-animated film based on the children's book of the same title by Chris Van Allsburg. Written, produced, and directed by Robert Zemeckis, the "human" characters in the film were "animated" using "live-action" performance capture technique, with the exception of the waiters who dispense hot chocolate on the train, because their feats were impossible for animated actors to achieve. Performance capture technology incorporates the movements of live actors into animated characters.

The film stars Daryl Sabara, Nona Gaye, Jimmy Bennett, and Eddie Deezen, with Tom Hanks in six distinct roles. The film was produced by Castle Rock Entertainment in association with Shangri-La Entertainment, ImageMovers, Playtone and Golden Mean, for Warner Bros. The visual effects and performance capture were done at Sony Pictures Imageworks. The studio first released the $170 million film in both conventional and IMAX 3D theaters on Wednesday, November 10, 2004.

It was the last film to which Michael Jeter made a contribution as he had died on March 30, 2003, and the film is dedicated to his memory.

A young boy (Daryl Sabara) on Christmas Eve is hoping for belief in the true spirit of Christmas. He suddenly hears some noise from downstairs and runs to investigate. Seeing a shadow of what appears to be Santa Claus, he soon discovers that it is his parents. He runs back to his room and looks through magazines and encyclopedias for confirmation of Santa Claus and the North Pole, but to no avail. Hearing his parents coming, he runs back to bed and pretends to be asleep while his parents whisper about how he had once stayed up late listening for Santa Claus. About an hour after they leave, a magic train called The Polar Express pulls up in front of his house. He is invited aboard by the train's mysterious conductor (Tom Hanks) to journey to the North Pole. Though he initially hesitates, he boards the train after it starts to move.

On the train, the boy encounters a group of other children who are on their way to see Santa Claus, including a young girl, a know-it-all and a lonely little boy. The boy also encounters a mysterious hobo (Tom Hanks), who lives on the top of the train, as well as the engineer and fireman (Michael Jeter). They must all overcome a variety of obstacles; at one point, a herd of caribou block the tracks. Later, the cotter pin holding the throttle together breaks. The train, now out of control and with the Hero Boy, Hero Girl (Nona Gaye), and the Conductor standing on the front, then reaches "Glacier Gulch," an area with steep downhill grades. The three must hold on tightly as the train speeds through Glacier Gulch and onto a frozen lake. The train tracks are frozen under the ice, and as a result, the Conductor must guide the engineer and the fireman towards the other side of the lake as the ice breaks up behind them.

They then reach the North Pole and find out that the lonely boy named Billy (Jimmy Bennett), riding alone in the observation car does not want to see Santa (Tom Hanks) because he has come from a broken home on the bad side of his hometown; he says that Christmas does not work out for him. The boy and girl run back to try to get him to come along with them, but the Boy accidentally steps on the uncoupling lever and the car speeds back to the Roundhouse.

The three of them travel from section to section of the North Pole's industrial area, first visiting the Control Center, then the Wrapping Hall, and finally a warehouse before they are airlifted back to the center of the city via air ship. As they watch the final preparations, one bell falls off Santa's sleigh. The boy picks it up and shakes it, remembering that the girl could hear a bell earlier when he could not. As before, he can not hear it. The boy then says he believes in Santa and the spirit of Christmas. He then sees Santa's reflection on the bell; he shakes the bell again and hears it at last. He gives the bell back to Santa.

The boy is handpicked by Santa Claus to receive "The First Gift Of Christmas." Realizing that he could choose anything in the world, the boy asks for the beautiful-sounding silver bell (that only believers can hear) which fell from Santa's sleigh. The boy places the bell in the pocket of his robe and all the children watch as Santa takes off for his yearly delivery.

The children return to the train, and the conductor punches letters into each ticket. These letters spell some form of advice (such as "Learn," "Lead," or "Believe" for the Know-it-All, Hero Girl, and Hero Boy respectively.) As the train leaves, the Boy discovers the pocket of his robe torn and the bell missing. He returns home, saddened by the loss of the bell, but is cheered when he sees that Santa had already arrived at Billy's house. On Christmas morning, his sister finds a small present hidden behind the tree after all the others have been unwrapped. The boy opens the present and discovers that it is the bell, which Santa had found on the seat of his sleigh. When the boy rings the bell, both he and his sister marvel at the beautiful sound; but because their parents no longer believe in Santa Claus or the Spirit of Christmas, they do not hear it. The last line in the movie repeats the same last line from the book:

"At one time, most of my friends could hear the bell, but as years passed, it felt silent for all of them. Even Sarah found one Christmas that she could no longer hear its sweet sound. Though I've grown old, the bell still rings for me, as it does for all who truly believe." 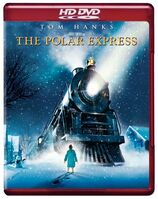 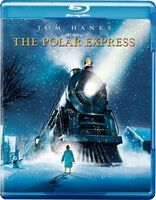 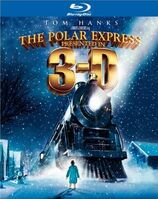 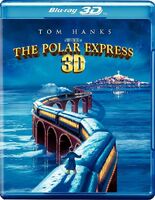 In addition to standard theatrical 35mm format, a 3-D version for IMAX was also released, generated from the same 3-D digital models used for the standard version. It was the first motion picture not specially made for IMAX to be presented in this format, and the first to open in IMAX 3D at the same time as main flat release. The 3-D version out-performed the 2-D version by about 14 to 1. The 3-D IMAX version was released again for the 2005 Holiday season in 66 IMAX theaters and made another $7.5 million prior to Christmas. Due to its financial success, the IMAX version was re-released in 2006, 2007, and 2008, and has become an annual Christmas movie. The 3-D version was released to DVD and Blu-ray Disc on October 28, 2008. Both formats include both the 2-D and 3-D versions of the film.

Retrieved from "https://christmas-specials.fandom.com/wiki/The_Polar_Express?oldid=45966"
Community content is available under CC-BY-SA unless otherwise noted.