The Santa Clause is a 1994 Christmas comedy movie starring Tim Allen, presented by Walt Disney Pictures and Hollywood Pictures, and produced by Outlaw Productions. It was notably the first movie collaboration between Allen and director Josh Pasquin, who had previously worked together on the TV series Home Improvement. It grossed over $144 million in the United States and over $189 million worldwide.

The movie was followed by two sequels - The Santa Clause 2 in 2002, and The Santa Clause 3: The Escape Clause in 2006. A mini-series following the events of the films, titled The Clauses, is set to premiere on Disney+ in 2022.

Scott Calvin is a divorced father and advertising executive with a young son, Charlie. On Christmas Eve, Charlie comes over to spend the night with him before going back to his mother and stepfather's house for Christmas Day. Scott's ex-wife, Laura, and her new psychiatrist husband, Dr. Neil Miller, both stopped believing in Santa Claus at a young age, and feel that Charlie should do so as well, but Scott, despite also not believing himself, wants Charlie to maintain his belief in Santa. Scott prepares Christmas dinner, but the turkey gets burned, so he takes Charlie to Denny's for Christmas dinner and later reads him The Night Before Christmas.

Shortly after, they are suddenly awakened by a clatter on the roof. Going outside to investigate, Scott sees someone up on his roof. He yells at the trespasser, which causes him to lose his balance and fall off. He appears to be Santa Claus. The man magically disappears, but his suit remains. They find a business card in a pocket stating that if something should happen to him, someone should put on the suit, and the reindeer will know what to do. They find his sleigh and eight reindeer perched on the roof. Scott puts the suit on to please Charlie, and begins delivering toys from house to house, with the chimneys magically adjusting to allow him in to make the deliveries, no matter what size they are.

Their final stop is the North Pole. Bernard the Head Elf shows him a tiny inscription on the card which says that, upon the death of the previous occupant, whoever wears the suit assumes the identity of Santa Claus and all the responsibilities and duties that go with it. This is the "Santa Clause", as stated by him: "You put on the suit, you're the big guy." He also gives Charlie a snow globe. Then he tells him that he only has eleven months, until Thanksgiving, to get his affairs in order before becoming Santa Claus full time, which he tries to refuse. He and Charlie spend the night at the factory. The next morning, they awaken back at his house, where the only indication of their previous night's adventure is his new silk pajamas with the initials "SC" monogrammed on them. He dismisses it all as a dream.

Soon, however, Scott starts gaining weight and his boss, Mr. Whittle, likens him to the Pillsbury Dough Boy and suggests to him that he should go see a doctor. He develops a ravenous taste for Christmas treats, like cookies and hot cocoa. He grows a long white beard, and shaving it off has no effect, as it regrows instantly. His hair also whitens, and despite all attempts to dye it, it simply changes back. He somehow knows who has been "naughty" and "nice". Children (who somehow know he is Santa despite him not dressing the same) approach him with gift requests. Scott's rapid transformation worries Laura and Neil, who try to terminate his visitation rights to Charlie. They question his mental stability, and believe that his changes are attempts at getting Charlie to like him.

Eventually, Scott's visitation rights to Charlie are suspended by court order. Disheartened, he begins to lose some of his certainty about his job as Santa. While visiting Charlie on Thanksgiving, whose insistence that he is Santa reawakens his magic, despite Neil and Laura trying to convince him otherwise, he, with Bernard's help, whisks him away to the North Pole. Laura and Neil, who think he has kidnapped him against his will, call the police, who make a massive investigation to find him and, if needed, arrest Scott as well.

Meanwhile, at the North Pole, Charlie helps Scott and the elves perfect a new sleigh and communication devices. He calls occasionally, but this only reinforces Laura and Neil's belief that he is being held against his will, despite his happy tone of voice. Eventually, Scott, as Santa Claus, goes on with his Christmas Eve trip, but is arrested while delivering presents to Laura and Neil's house, and is accused of kidnapping Charlie, being taken away to jail despite the pleas of kids to have him released. Lack of contact with him reaches the North Pole after his arrest. A team of rescue elves, the E.L.F.S., dispatched by Bernard, free him from jail by tying up the front desk guard. They then fly him and Charlie home to Laura and Neil, to whom he gives the presents they always wanted since childhood, but never got: Laura gets a Mystery Date game, and Neil gets an Oscar Mayer "Wienie Whistle". (It was because of not getting these that they became convinced Santa didn't exist.)

Laura, finally realizing that Scott really is the new Santa, tosses the custody papers into the fireplace and welcomes him to come and see Charlie any time that he wants. Bernard tells Charlie that the snow globe is magic, and that anytime he wants Scott to visit, all he has to do is shake it. After ten minutes, he does so, and Scott comes back, saying that he was on his way to Cleveland, and takes Charlie with him.

The film's score was composed and produced by Michael Convertino (making this the only film in the trilogy to be scored by him), and conducted by Artie Kane. 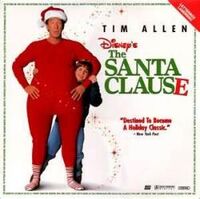 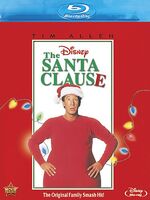 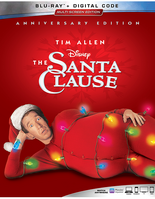 On the theatrical and the initial home video release, Tim Allen made a sarcastic remark in the movie, which included the line "1-800-SPANK-ME." Two years after the movie's release, a woman from near Cleveland called the supposedly-fictional number for her curious grandchildren; it turned out to be a phone sex line. However, it wasn't until 1997, when Disney received complaints from parents whose children called the number and racked up huge phone bills, did the studio take action and cut the line for future releases. Disney also said that they would purchase the number to disconnect the service.