Eight years have gone by since Scott Calvin (Tim Allen) first took up the Santa Claus job, and became subject to the Santa Clause. Now he is at the top of his game at the North Pole and could not be happier, at least until Bernard the Head Elf (David Krumholtz) and Curtis (Spencer Breslin), the Keeper of the Handbook of Christmas, break the news that there is another clause - the "Mrs. Clause". Santa/Scott is now pressed to get married before next Christmas Eve, or the clause will be broken and Christmas will die away. At the same time, Abby, another elf (Danielle Woodman), delivers news that is more distressing: his own son Charlie (Eric Lloyd) is on the naughty list. It then cuts to Charlie one night defacing the walls of the school gymnasium from the skywindow until he is caught by Principal Carol Newman (Elizabeth Mitchell). Scott must return to his home to search for a wife and set things right with Charlie. He even brings this up when visited by the Council of Legendary Figures consisting of Mother Nature (Aisha Tyler), Father Time (Peter Boyle), Cupid (Kevin Pollak), the Easter Bunny (Jay Thomas), the Tooth Fairy (Art LaFleur), and the Sandman (Michael Dorn).

To cover for Santa's prolonged absence, Curtis helps him create a life-size toy replica of him, much to Bernard's horror. However, this larger than life legalist cannot find any grace or slack in his plastic heart for minor infractions by children all over the world, having followed the handbook too strictly. Toy Santa takes control of the North Pole with a duplicated army of life-size toy soldiers. He thinks that everyone is naughty and plans to give the entire world lumps of coal.

Because of the impending end of his contract, Scott undergoes a "de-Santafication process" which gradually turns him back into Scott Calvin. He has a limited amount of magic to help him. He attempts to reconcile with Charlie, who keeps vandalizing his school to get attention. They both hit the cold hard wall of Carol when Charlie defaces the lockers.

Charlie confesses how hard it is for him that Scott is never around like other fathers, and reveals the stress he is under to conceal the secret that his father is Santa. Scott vows to try harder as a dad, and they reconcile.

After a few failed dates, Scott finds himself falling for Carol. He accompanies her in a sleigh to the school faculty Christmas party, which turns out to be dull and boring. Using a little of his Christmas magic, he livens it up by presenting everyone with their childhood dream gifts (much like he did for Laura and Neil in the first film). He makes a special presentation to Carol, and, with his last remnant of magic, wins her over and they kiss passionately. However, she balks when he attempts to explain he is Santa, believing that he is mocking her childhood, until Charlie manages to convince her by showing her his magic snow globe.

Curtis flies in to deliver the dreadful news about Toy Santa's coal binge. However, Scott has used up the last of his magic wooing Carol and Comet has eaten too many chocolate bars. Toy Santa wastes no time in subduing him, but Charlie and a now-believing Carol spring him free by summoning the Tooth Fairy to fly them there. He goes after Toy Santa, who has already left with the sleigh, riding Chet, a reindeer-in-training, and they both crash back into the village. With an army of elves, Carol, Bernard, Charlie, and Curtis lead a snowball war to overthrow the toy soldiers. Toy Santa is reduced to his normal six-inch height. Scott marries Carol in a ceremony presided over by Mother Nature herself. He transforms back into Santa, Christmas proceeds as it always has, and he and Carol have a three month honeymoon to go on the next day. In addition, he and Charlie reveal the truth to Lucy (Liliana Mumy), Charlie's younger half sister (the daughter of Laura and Neil) about him being Santa Claus so that she is now in on the secret. 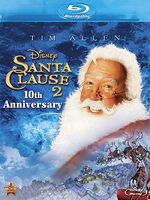 Retrieved from "https://christmas-specials.fandom.com/wiki/The_Santa_Clause_2?oldid=45974"
Community content is available under CC-BY-SA unless otherwise noted.