"The Santa Experience" is the first Christmas episode of the Nickelodeon animated series Rugrats, aired in the show's second season.

The episode opens at a department store in the city, where Angelica goes to see the store's Santa and tells him what she wants for Christmas, the most important item on her list this year being a Deluxe Cynthia Beach House with attached garage. When he expresses some doubt that he can bring her all that stuff, Angelica figures out she isn't talking to the real Santa and furiously tears off his beard to expose him as a phony, causing a panic with the rest of the crowd waiting to see him when she blurts it out afterwards. To shut her up on the matter, the mall manager presents her with a big box of toys. Meanwhile, Chuckie is explaining to Tommy that he greatly fears the Christmas season because he thinks Santa Claus is scary. Tommy finds that idea ridiculous and offers to catch Santa when he shows up on Christmas Eve so he can show Chuckie that he is not scary.

Angelica's father, Drew, is upset over the fact that she seems to have lost her faith in Santa after the incident at the store, and Chuckie's dad, Chas, who always had rather disappointing Christmases in his youth, does not want Chuckie to suffer the same disappointment as he did. When the adults decide to rent a cabin in the mountains and spend Christmas there, Chas offers to dress up as Santa for the kids, but Drew thinks they should just hire a professional to do that job.

Meanwhile, Angelica is disappointed that the department store's gift box does not contain anything she wants. When Phil tells her that he's trying to find a good gift for Lil, she offers to give him a box of crayons she found in there for Lil's coloring book, but she makes him hand over his Reptar doll in exchange. Then, when Lil expresses to her that she needs a gift for Phil, she gives her a Reptar space helmet in exchange for her coloring book. Angelica at first finds delight in the fact that their gifts for each other are useless due to her now having Phil's Reptar doll and Lil's coloring book. But when Grandpa Lou tells the kids a story about Santa and how he punishes bad kids with coal, she begins to worry about the consequences of her plan. She tries to reason to herself that there is no way Santa knows of what she did, but she then has a nightmare about him leaving boxes of coal under her Christmas tree and realizes she has to trade Phil and Lil's presents back before her nightmare can become reality.

Later, after the families arrive at the mountain cabin on Christmas Eve, Tommy and Chuckie start making plans for their Santa traps with all the different entryways in the cabin, except for the chimney, ironically. Angelica tries to talk with Phil and Lil long enough to return the things she took from them, but fails at every turn. Later that night, after the other kids have gone to bed, she tries calling a holiday help hotline to ask Santa if she is on his good list or bad list, though she ends up calling the wrong number and the man on the other line says she is on the bad list, much to her dismay.

Chas, dressed as Santa, goes up on the roof to come down the chimney, just as Tommy's dad, Stu, accidentally triggers one of Tommy and Chuckie's traps, waking the kids up. When they get out of bed and find that it was only Stu who triggered the trap, they suddenly see Chas come down the chimney and are scared by his appearance until he removes his fake beard and hat. The kids are all relieved by this, especially Angelica, who thinks she does not have to worry about Santa punishing her anymore, but then suddenly a more professional-looking Santa Claus appears at the door. He hands out presents to all the kids, including Angelica, who is relieved when she finds that her gift is the Deluxe Cynthia Beach House that she wanted, with Santa explaining to her that her trying her best to return Phil and Lil's things was just as nice as actually doing a good deed. After he leaves, Phil and Lil exchange their gifts for each other, after which Angelica finally succeeds in giving back his Reptar doll and her coloring book, while Chuckie tells Tommy that he does not find Santa scary anymore. Chas thanks Drew for hiring the professional Santa, but when Drew calls the man he hired (actor Barney Stevenson of the Santa Experience), he finds out he got stuck in traffic and decided to just stay home instead, thus revealing that they were in fact visited by the real Santa Claus. The special ends on Angelica finding a small lump of coal in place of a toy car in the Deluxe Cynthia Beach House's attached garage.

Nickelodeon regularly aired the episode annually from 1992 until 2006. In addition to later airings on the Nicktoons Network and TeenNick (as part of The 90s Are All That programming block and its successor, NickSplat), the episode also ran as a one-shot special in syndication on certain affiliates in the 1990s and had a special airing on CBS on December 1, 2001.

Two years following its premiere broadcast, the episode was given its first VHS release by Sony Wonder on August 30, 1994. In 1996, after the series' video rights were transferred to Paramount Home Video, they released the special on VHS again, this time with a bonus episode from the show's third season, "The Blizzard". Paramount reissued their VHS of the special two more times, in 1998 and 2000, giving it new cover art both times.

The episode made its DVD debut as one of the episodes featured on the second disc of the Rugrats Holiday Collection DVD set, released on August 31, 2004. It was also featured, notably along with "The Finster Who Stole Christmas" (the Christmas episode of the spin-off series All Grown Up!), on the Nick Picks: Holiday DVD, released on September 26, 2006. The episode was then released on Amazon.com's now-discontinued complete Rugrats: Season 2 manufacture-on-demand set, released on May 9, 2014. A "wide retail" version of the Season 2 set was released by Paramount on May 2, 2017, almost three years later.

The episode is also available to purchase on iTunes. 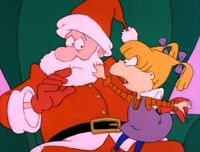 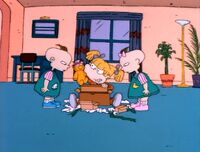 Angelica does not like the toys that the store manager gave her... 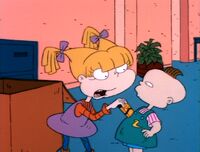 Angelica offers the crayons to Phil in exchange for his Reptar doll... 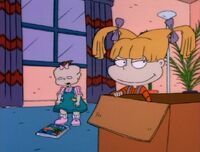 ...and then offers a Reptar space helmet to Lil in exchange for her coloring book. 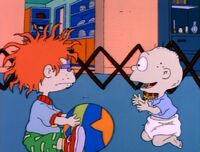 Meanwhile, Tommy decides that he and Chuckie will catch Santa. 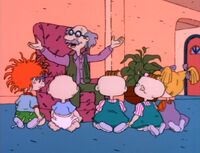 Grandpa Lou tells the kids all about Santa. 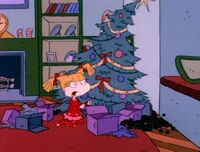 Angelica has a nightmare about receiving coal from Santa. 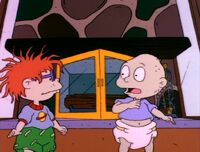 Tommy and Chuckie decide not to booby-trap the chimney. 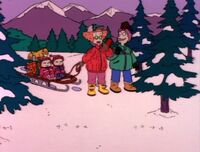 Didi and Betty go looking for a tree. 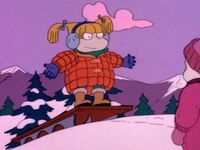 Angelica tries to tell Phil and Lil she wants to return what she took from them. 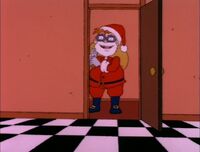 Chas gets ready to play Santa... 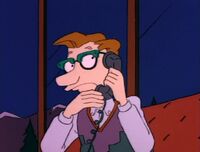 ...while Drew calls for a professional actor. 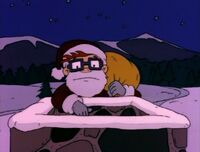 Chas goes down the chimney... 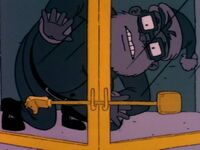 ...but he gets stuck when the Rugrats see him. 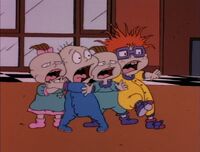 The Rugrats are scared when they see Chas coming down the chimney. 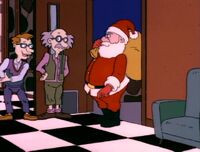 Drew welcomes (what he thinks is the professional playing) Santa. 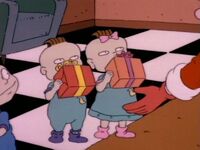 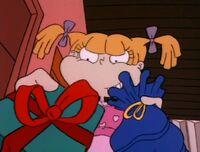 Angelica finally manages to return Phil and Lil's things to them. 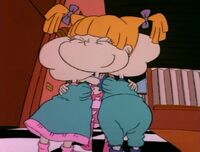 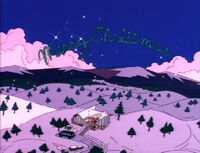 The closing shot.
Add a photo to this gallery

Retrieved from "https://christmas-specials.fandom.com/wiki/The_Santa_Experience?oldid=148431"
Community content is available under CC-BY-SA unless otherwise noted.