The Search for Santa Paws

The Search for Santa Paws is 2010 direct-to-video film released by Walt Disney Home Entertainment that serves as a prequel to Santa Buddies.

The film opens at the North Pole where the immortal 1,600-year-old Santa Claus gets news that his old friend, New York toy shop owner Mr. Hucklebuckle, has passed away. The news of his death comes with a present, a stuffed dog "toy" that Hucklebuckle had wanted Santa to have. Thanks to the magic of the great Christmas icicle, that stuffed dog comes to life as a puppy whom Santa befriends and names Paws.

Meanwhile in Manhattan, Hucklebuckle's lawyer Mr. Stewart explains to James Huckle that his grandfather's shop will be his, provided that he and his wife Kate can manage it profitably for one holiday season. That sounds kind of whack to the Huckles, self-important Angelenos who can't seem to conceive children. But they agree to it, temporarily moving into the unseen apartment above the shop.

The orphans come into play at a West 64th Street girls' foster home, evidently the worst foster home in the world. It is run by Ms. Stout, a woman far more evil than her surname suggests. She confiscates any toys that the girls have and immediately brings them down to the basement to burn in the incinerator.

She also locks misbehaving kids down there (the basement, not the incinerator) overnight. Her whipping girl is Willamina ("Will" for short), who is getting a bit long in the tooth for adoption. The newest ward is 6-year-old Quinn, who takes a liking to Will.

The Miracle on 34th Street part of the equation is the result of Santa Claus and Paws taking a trip to New York City. Through his own fault (and his dog's recklessness), Santa gets sort of brushed by a taxi cab, which is enough to cause confusion and memory loss. Santa forgets who he is and what he's doing. To boot, Paws gets separated from him and an unscrupulous hobo pockets Santa's sacred possessions.

Fortunately, disoriented Santa wanders into the Hucklebuckle toy shop and has just the look the Huckles need for their in-store Santa. He takes the job and single-handedly brings business in with his thoughtful ideas and golden demeanor. 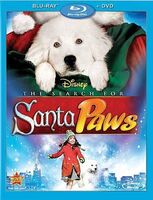