The Smurfs' Christmas Special is a 1982 animated Christmas television special spun off from the Hanna-Barbera animated show Smurfs, based on the Belgian comic series Les Schtroumpfs by Peyo. It premiered on NBC on December 13, 1982, and has since re-aired on the USA Network, Cartoon Network, and Boomerang. It was nominated for the 1983 Primetime Emmy Award for Outstanding Animated Program, but lost to Ziggy's Gift.

It is Christmas time in the Smurf Village, and they are happily preparing for the holiday celebration, hanging wreaths, stockings, and ornaments on the big tree in the middle of the village. Harmony is practicing his horn solo, but Smurfette, Grouchy, Greedy, and Brainy don't want to hear him play it, so he plays for Lazy while he's sleeping and dumps a pile of snow on top of him. Jokey is busy loading up a sled with his Christmas "surprises" for every Smurf, but when Harmony tries to play his solo for him, one of them erupts in his hand. Papa Smurf watches his little Smurfs working together with their Christmas preparations, saying that this could be the best celebration they will ever have. Brainy catches Greedy sneaking a taste of the smurfberry pudding and goes on nagging endlessly to him until Papa Smurf gets him to stop. Then he tells him that the pudding isn't complete until they add the final ingredient - the last walnut. Unfortunately, Greedy has eaten it, so Papa Smurf tells him that he will go get another one from a squirrel.

Meanwhile, in his castle, Gargamel groans about how miserable Christmas is, knowing that the Smurfs are spreading their love and good cheer on that day. As Azrael accidentally knocks over a stack of books, Gargamel finds one of them opened to a page about "Mother's Old Recipe for Making Life Miserable" and believes it could be the perfect way to destroy the Smurfs. Unfortunately for him, the recipe backfires on him as soon as he adds the last ingredient.

Out in the forest, an old man is riding in a sleigh with his two grandchildren, William and Guinevere, telling them about Santa Claus, who brings children presents every Christmas Eve. Suddenly, they are attacked by a fierce wolf, with a stranger in a purple cloak (who is never named but is heavily implied to be the Devil) watching. While the Smurfs are busy getting another walnut from the squirrel, the children seek out help for their grandfather, who is buried underneath the wrecked sleigh. They come across Gargamel's castle and ask him if he could help rescue him. He asks them if they have any money, and when they say no, he slams the door in their faces, so they go looking for someone else to help them. In a chateau near a human village, a man fusses that his niece and nephew should have arrived hours ago and tells one of his servants to organize a search party immediately.

Gargamel is visited by the stranger seen earlier, saying that he will give him the power to destroy the Smurfs, but all he wants in return is the two children who are lost in the forest. When asked why, he answers that he wants revenge on their uncle who, by his good nature, would meddle in his affairs. He offers him a scroll that will tell him how to find the Smurf Village and what he should do when he gets there, but he won't give it to him until he finds the children. As he goes out into the forest to find do so, he comes across their uncle, who is also out looking for them. The uncle asks him if he's seen them, saying that their grandfather is all right, and is offering ten gold coins for their safe return. This makes Gargamel happy, seeing that he can get a reward for finding them and get his hands on the Smurfs.

Near a tree, William and Guinevere huddle close together to keep themselves warm and to comfort one another so that they won't be scared being all alone in the forest. Guinevere sings "Silent Night", which attracts the attention of both the wolves and the Smurfs who were just passing through on their way home. However, the wolves find them first and are ready to attack when Papa Smurf intervenes. William thinks that he is Santa Claus, and after the wolves depart, Guinevere tells him and the other Smurfs about their grandfather. He tells Hefty, Brainy, and Clumsy to find the sleigh, then tells Smurfette to go back to their village to get help for the children. He stays with them, finding himself a little uncomfortable answering William's question if he was Santa Claus.

Upon reaching the village, however, Gargamel is disappointed to find out that the Smurfs aren't around, but he decides to go ahead with reciting the incantation on the scroll, causing everything in the village to wither away until everything is left in ruins. After the scroll vaporizes, Gargamel cackles in glee, seeing that the Smurfs will be miserable this year, and then returns to the forest to collect his ten pieces of gold. Meeting with Edgar and his men at the wrecked sleigh, he tells them that he saw the stranger take the children away. Edgar sets off to find him, saying he will only pay Gargamel when the children are found. Then the stranger shows up, telling Gargamel that he has broken their contract. He is rather fearful when the stranger says he will now come with him, and when he and Azrael back away from him, he turns a tree into a bunch of snakes, forcing them to surrender.

Tracker leads the Smurfs onto a trail of human tracks and cat paw prints in the snow, which means that the stranger now has the children, Gargamel, and Azrael in his clutches. In an open barren field, he is ready to take his captives on what he calls "their final journey" and surrounds them with a ring of fire to prevent their escape while he summons a portal that will take them all to his home. The scene is so frightful that even Gargamel is on his knees begging for mercy. The Smurfs, who have found the ritual starting, wonder what they can do to combat such evil. Papa Smurf says there is one thing that can overcome it, the power of love, and so he directs his little Smurfs into singing their song, singing it loudly enough so that the children could hear and sing along. The stranger is getting upset by this and warns the Smurfs that they're dealing with a power they know nothing about. But the singing continues, which makes the ring of fire surrounding the captives grow higher, and even Gargamel is forced to sing along with the Smurfs. Eventually this overpowers the stranger to the point where he and his ring of fire disappear.

As the Smurfs cheer for their victory, William and Guinevere hear their Uncle Edgar and grandfather calling for them. They turn to see that their grandfather is all right and safe, riding in their Uncle Edgar's sleigh. Gargamel demands his payment, saying that he helped rescue them, which William refutes by saying that he was mean to them. However, Guinevere says not to hurt him because Christmas is a time for forgiving, even the likes of him. After he fearfully departs, William and Guinevere tell their Uncle Edgar that they met Santa Claus. As they ride off, the children wave goodbye to the Smurfs, who are hiding on a precipice.

Upon returning to their village, the Smurfs are all huddled around outside in blankets, looking at the devastation Gargamel left behind. Papa Smurf says that while they don't have all the nice things about Christmas or even the comfort of warm beds, what they do have is each other, which most of them can agree with. Harmony offers to play his solo, and as he does so, something miraculous happens: the tree lights up, fully restored, and so does the village. Papa Smurf is not sure how that could happen, but he is sure that anything can happen on Christmas.

The special, along with 'Tis the Season to Be Smurfy, was included on The Smurfs Holiday Celebration DVD, released by Warner Home Video on October 4, 2011. 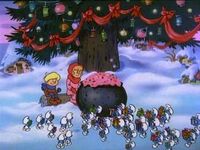 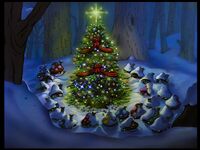 Retrieved from "https://christmas-specials.fandom.com/wiki/The_Smurfs%27_Christmas_Special?oldid=162941"
Community content is available under CC-BY-SA unless otherwise noted.