The Star of Christmas is a Christmas movie, based on and starring the characters from the direct-to-video show VeggieTales, presented and produced by Big Idea Productions, that was premiered on October 29, 2002 while the prodco's Jonah: A VeggieTales Movie is still in the theatrical release. The story is set in London in the 1882, with a Dickens quality to it, and it centered on two would-be operatic composers. It was followed with a 2004 sequel called An Easter Carol (a direct Easter set parody of Charles Dickens' A Christmas Carol), as it features the same characters & setting.

In 1882 London, Cavis Appythart and Millward Phelps—jingle writers who decide to make their big break into musical theatre. While Millward is content to see their work featured on billboards and in newspapers, Cavis believes they can make a difference in crime-ridden London by staging a grand musical that will move the citizens to greater expressions of love. Their opportunity arises when Millward's Uncle Nezzer grants them the use of his theater on Christmas Eve. They plan the huge production of a new musical called "The Princess and the Plumber". Unfortunately, the script is not yet complete, and the premiere is only 3 days away.

Seymour Schwenk (Sullivan's and Gilbert's middle names), their friend and an inventor, shows up in an experimental rocket car (a direct reference to Chitty Chitty Bang Bang) and delivers a box of light bulbs to them. Cavis maintains that if their production is glitzy and bright (electric lights are still a novelty at this time and were first introduced at the Savoy Theatre for Gilbert and Sullivan's Patience) then it will be a bigger hit and reach more people. He plans to integrate the lights directly into the scenery itself (and, soon, the costumes as well).

However, they still have much work to do. They need to convince the city's premiere talent, Constance Effie Pickering, to star in the lead role, and they need to get a commitment from Prince Calvin Fredrick to attend the premier. While Cavis and his assistant Bob Winston work on Pickering and the Prince, Millward struggles to complete the script. Everything comes together, and Cavis starts feeling confident that their production will be a huge success. The Prince tells Pickering that her pipes are corroded they water can't drain and her toilet exploded, she's flushing in vain.

After noticing a flyer for a Christmas pageant planned to debut on the same night at a local church, Cavis goes to investigate. He observes Edmund Gilbert preparing a low-budget children's play, and concludes that it poses no threat to their grand production. However, the pageant intends to feature an object called the "Star of Christmas". Wondering aloud about this as he leaves the church, Cavis is overheard by Arthur McHollingshead. Arthur, a historian, reveals that the Star of Christmas is an ancient relic that has not been seen by the public in 79 years. He rushes off with great excitement to report the news, which promptly makes the front page headline the following morning.

Faced with the prospect of losing their audience (and in particular the Prince) to the pageant, Cavis vows to make their own production greater and flashier than before. But they can't compete with the Star of Christmas, and in desperation Cavis and Millward go to the church to steal the Star. They are caught, however, and narrowly escape from the aged "Moyer the Destroyer" who was left to guard the relic. With the Star and the flashy lights, Cavis is certain that "The Princess and the Plumber" is now a guaranteed success. But during dress rehearsal, the excessive amount of lights (a suspected fire hazard all along) ignite the curtains. In minutes the theater goes up in flames and with it the Star of Christmas. As they stand and rue this terrible turn of events, an officer named Dwiglight Howarde arrives with Moyer LaGumtree, and Cavis and Millward are arrested.

In the jail, they meet a prisoner, Charles Pincher, who laughs at their efforts to spread love by means of an elaborate stage production. He claims that real love does not expect fame or wealth in return, that real love makes sacrifices to help others without expectation of personal gain. That kind of love, he says, is extremely rare.

As if on cue, Edmond and his father, Jesse, arrive at the jail to release Cavis and Millward. They have chosen not to press charges for the theft of the Star. Cavis is moved, and he expresses his desire to attend the pageant. But the pageant starts in ten minutes and there is not enough time to get there. Just then Seymour shows up in this rocket car. He entrusts Millward to drive the vehicle and try to get them all to the church on time. It's a harrowing ride fraught with collisions and near-misses, but they do arrive just as the pageant is about to start to crash through a bakery and a bank.

The pageant goes on with the Prince and Miss Pickering and everyone else in attendance. Cavis finally learns that Christmas is not about glitz and grand productions; he understands that it is about a baby in a manger, Jesus, who is the real "Star of Christmas". After the play, Moyer shows up and says that the real Star of Christmas (the object) is actually safe, and that they actually took the Turtle of Damascus, which most people consider a hoax. The episode ends with Cavis and Millward performing a selfless act at last: they bring cookies and a gift to Charles Pincher in his jail cell, Cavis says, smiling warmly, "Merry Christmas Mr. Pincher".

All Songs Arranged by Kurt Heinecke 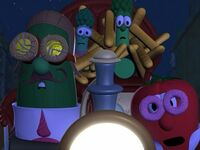 Retrieved from "https://christmas-specials.fandom.com/wiki/The_Star_of_Christmas?oldid=162208"
Community content is available under CC-BY-SA unless otherwise noted.