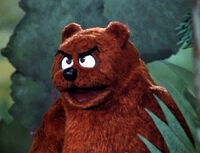 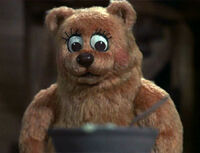 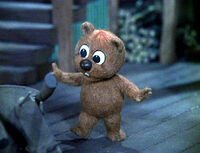 While traveling around the Island of 1023, Happy the Baby New Year wanders into the cottage of the three bears while they are off on a walk in the woods. Just like Goldilocks in the fairy tale, Happy eats up the bears' porridge, sits in their chairs, and then takes a nap in Baby Bear's bed. When the bears return home and find Happy, Baby Bear befriends him. They then play a game of "let's pretend", with Baby Bear pretending to be a dragon and Happy as a knight. Unfortunately, when Happy is asked by Baby Bear to remove his hat, the bears end up laughing at his oversized ears, just like everyone else who has seen them. Happy sadly crawls away into the woods, ignoring Baby Bear's pleading for him to come back. The three bears are not seen again for the rest of the special after this scene.

Retrieved from "https://christmas-specials.fandom.com/wiki/The_Three_Bears?oldid=160100"
Community content is available under CC-BY-SA unless otherwise noted.